‘Not my babies’: Mum’s devastating reaction after learning three kids died in fire 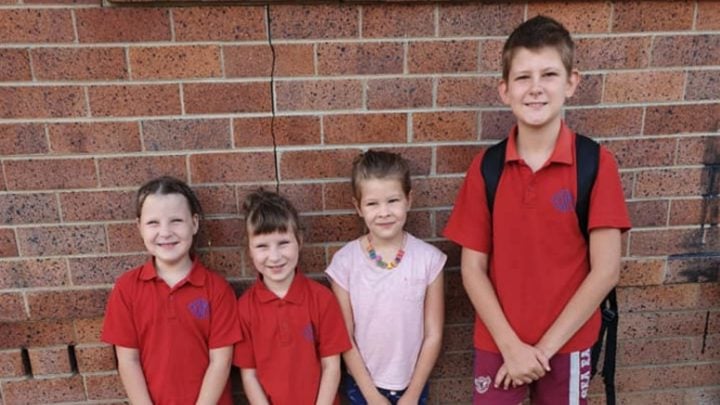 Twin girls Matylda and Scarlett and their 11-year-old brother Blake tragically died in a fire in the small town of Singleton on Wednesday while their sister Bayley (second from right) was rescued by neighbours along with their mother. Source: Facebook/ Kara Atkins

A close friend of the mother whose three children died in a tragic house fire last week has revealed she feels wracked with guilt over their deaths – as the mum’s devastated reaction in hospital after learning they didn’t survive is revealed.

Kara Atkins and her eight-year-old daughter Bayley were pulled free from their home in Singleton, New South Wales, last Wednesday as it went up in flames – however her other three children could not be saved.

Twin sisters Matylda and Scarlett were pulled unconscious from their smoke-filled rooms by emergency service crews who reportedly smashed through windows to reach the girls. The five year olds were rushed to hospital but sadly could not be saved, while their 11-year-old brother Blake didn’t make it out of the house alive.

Devastated mum Kara, 31 was reportedly aware her son didn’t survive the fire however, according to The Daily Telegraph, only learnt of the deaths of her youngest children over the weekend.

“She’s awake now and has been screaming over the weekend, ‘where are the children?’” close friend Tash Hunter told the news outlet.

“She screamed, ‘Why the girls? Please, not the babies’. The doctors told her what happened at the weekend. She’s no longer on sedatives and can’t stop crying and feels guilty she’s the only one who survived.”

Tash said Kara blames herself and is in “deep shock” since learning the heartbreaking news about her daughters, who she had believed survived as they were taken in an ambulance from the scene last week.

The mother and her surviving daughter were pulled from the burning home from a window at the back of the property by brave neighbours Deanna Stolzenburg and Matisse Maskey, who rushed to the house when they saw it up in flames.

Residents in the NSW town of Singleton are in mourning after a fire ripped through a home in the early hours of this morning, claiming three children, including 5-year-old twins. A @gofundme has now been set up to help the family. https://t.co/gRIJPF2JUi @ChrisReason7 #7NEWS pic.twitter.com/YwoJWkwaRL

Meanwhile Deanna’s boyfriend Brayden Rogers entered the house looking for the other three children before the intensity of the flames forced him to retreat, The Daily Telegraph reports.

“We kicked the door in after getting the mother out,” he recalled. “We were on our hands and knees and couldn’t see nothing. As I said, I couldn’t go any further than the laundry, it was just too hot and I couldn’t see anything.”

The tragedy has rocked the small NSW town, with community members rallying together to support the family.

Resident Caitlyn Stemmer has launched a GoFundMe page in hopes of raising funds to help the family rebuild.