‘Kangaroo Court’ and ‘Confusion’: Shambles and hysteria rampant in Canberra 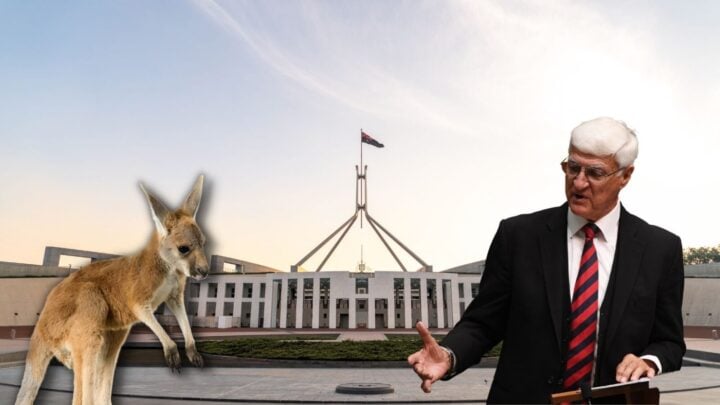 A day of shambles and hysteria in Canberra. Source: Getty

On Thursday, Australia’s federal politicians gathered in Canberra for another day of inspirational policy-making.

Our greatest minds and bravest hearts met in the Parliamentary Chamber, a place of great influence, to fight for change, and transform the lives of ordinary Aussie’s, building a better Australia.

Or so you thought…

On Thursday, in Canberra, Parliament was a shambles of strange outbursts, incompetence, harassment and hysteria. We’ve brought you the highlights:

Dr Helen Haines, the independent member for Indi, moved a motion for establishing a federal integrity watchdog, a federal version of IBAC and ICAC.

Dr Haines made an impassioned speech, detailing her reasons for motioning for an integrity commission to be established. She listed ongoing scandals, and the deteriorating trust of elected officials as key reasons for this motion to be moved, citing the two long years of hard work to get her bill off the ground. Ending her call out for supporters, Haines said:

Independent MP Helen Haines: “The Government is ignoring the will of the people and now it’s obstructing the will of the Parliament.”
Watch as Liberal MP Bridget Archer shocks her colleagues by seconding the motion on an integrity commission. @SBSNews #auspol pic.twitter.com/w65IzfgOhj

The Deputy Speaker called for a seconder. And then… the unthinkable. Liberal MP and member for Bass, Bridget Archer, seconded the motion, breaking ranks, and crossing the floor to support Haines and her bill. Haines praised Archer for her actions, calling Archer “the absolute lioness of the 46th Parliament”.

Helen Haines furious that her integrity commission push was defeated on an “undemocratic technicality” (because while the vote won 66-63, it wasn’t an absolute majority so it failed)

An incredible shot of Bridget Archer and Helen Haines leaving the House by @cochl pic.twitter.com/uxS9srZoEk

This brave act by Archer was not easy for Archer, with images showing Frydenberg talking to Archer, appearing to be trying to persuade Archer to change her mind, on the floor of Parliament. Australians had plenty to say about this:

Here’s standover man @JoshFrydenberg ‘respecting’ a female MP, fellow Lib @BridgetArcherMP because she decided to vote in favour of an integrity commission. What an absolute grub this man is. Grub, I tell ya! pic.twitter.com/tvKL380bs1

And then Josh Frydenberg bullied Bridget Archer – should be reported to Comcare or Worksafe ACT pic.twitter.com/dnEsG1bRgH

Archer stuck by her position, later saying “There’s no debate on the fact that we need one … and we shouldn’t be afraid to have the debate on what it looks like.” Archer released a statement on Thursday evening, confirming that Frydenberg wasn’t trying to bully her into changing her position:

This wasn’t the only difficulty Frydenberg struggled with on Thursday, also spending a considerable amount of time attempting, and failing to open a water bottle. Finally, his pal Barnaby Joyce managed to crack the bottle open, and handed it back to Frydenberg, ready to drink.

Prime Minister Scott Morrison also had a go at degrading the federal anti-corruption commission that Archer broke ranks to support, calling the ICAC model in New South Wales a “Kangaroo court”, which was a “disgrace” that dragged Gladys Berejiklian through the coals.

Scott Morrison claims “what was done to Gladys Berejiklian…was an absolute disgrace”, telling parliament she was “done over” by the corruption watchdog.

The ICAC is yet to release the findings of its investigation into whether the former premier breached public trust. #auspol pic.twitter.com/oJKRiJEWxv

This statement by Morrison also raised questions about the statement’s legality, from Aussie’s watching along at home:

And finally, the outspoken Member for Kennedy and Leader of Katter’s Australian Party, Bob Katter, had a short little outburst when the final count for the federal corruption commission bill was being conducted, saying:

“A lot of us are very confused. I’m one of the dumber ones… I’m really at a loss.”

After this week, I think many of us can relate to Mr Katter’s sentiments.