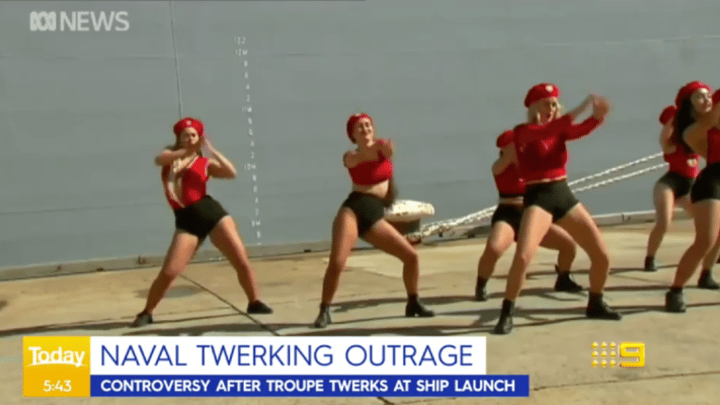 A group of twerking dancers have raised the eyebrows of high-ranking military personnel and MPs at the launch of a $2 billion vessel. Source: Nine News

Senator Jacqui Lambie has slammed the decision to have a group of scantly clad dancers twerking at a formal naval event, calling it “an absolute shocker” and adding that the decision didn’t bode well for the future of Australia’s Defence Force.

The dancers — who were dressed in booty shorts, crimson fishnet crop tops and military-esque red berets — twerked and gyrated in front of the ship, celebrating the launch of the HMAS Supply at Garden Island in Sydney on Saturday.

The footage has caused outrage for being an entirely “inappropriate” choice of entertainment at the opening of a naval ship, an event where high-ranking military officials and MPs were present.

Lambie told the Today show Thursday morning that “it was not the time or place”. “I thought I was watching the Super Bowl there for a split second, I will be honest with you,” she said. “Whoever made that call, it’s an absolute shocker for goodness sake. It is not the time and place to have [that].

“Good on those young ladies for getting out there, but I tell you being half-clothed outside a war ship is probably inappropriate. You know, if that [decision was made by] the leadership in our Defence Force, God help our sons and daughters who are serving.”

According to The Daily Telegraph, the new Defence Minister Peter Dutton has copped serious criticism over the incident, which raised the eyebrows of audience members, including Chief of the Defence Force General Angus Campbell, who appeared somewhat stunned throughout the performance. Governor-General David Hurley was also in attendance, however a spokesperson for the Defence told The Daily Telegraph that he arrived after the dance.

According to ABC News, the incident has also caused annoyance inside federal government ranks, with one senior MP dubbing the incident a “shitshow”, while Liberal backbencher Phillip Thompson has raised his concerns directly with Dutton.

Thompson questioned the appropriateness of having dancers at all, let alone twerking ones. “Standards in the ADF, and definitely when commissioning a ship, should be a little bit higher than that,” he said. “We’ve got the CDF, we’ve got members of parliament there, and the Governor-Generals there. I don’t think it’s appropriate to be twerking.”

A government frontbencher who wished to remain anonymous told ABC News, “The dancers are beside the point — we’re meant to be a fighting force. A question worth pondering: what would [British naval commander] Horatio Nelson think of this shitshow?”