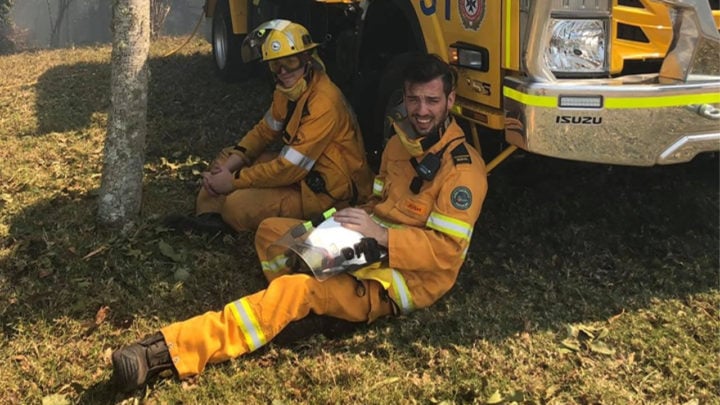 They may not wear capes but the brave firefighters battling dozens of blazes across the country have been hailed as true Aussie heroes for stepping forward and putting others first in what has been a horror few days in the Land Down Under.

Like they have done many times before, firefighters young and old have risked their lives to protect communities in Queensland and New South Wales as fires continue to burn out of control. Working through the day and night, the brave men and women have barely taken a moment’s rest, but their actions haven’t gone unnoticed.

A photo of two of the hundreds of firefighters was shared online on Monday amid the devastation, showing them taking a well deserved break with the smoke hazed background showing just how close they came to the flames. “Our firefighters are working around the clock. Leave your messages for them below!” Queensland Fire and Emergency Services wrote alongside the post on Facebook.

Aussies were quick to send messages of support and love to the pair and their colleagues with many labelling them heroes for helping to save the homes of families, who have been evacuated to safer areas. “Job well done, you’re very courageous,” one person commented on Facebook. “I truly believe you are all heroes. Blessings to you all.”

While another added: “Thank you to all firefighters in Australia you are our heroes for sure. Stay safe guys.” And a third said: “Thank you so much for all the wonderful help. Absolutely incredible what you guys have all done, our community are so grateful.”

Over the weekend firefighters were focusing on bushfires burning around the towns of Applethorpe and Stanthorpe in Queensland, as well as the Binna Burra region on the Gold Coast Hinterland. However, on Monday afternoon another was sparked further north in the Sunshine Coast around Peregian Springs.

Footage of the devastating scene has been shared right across social media showing the extent of the fire as it moves closer to homes in the region. On Tuesday morning, residents in Peregian Beach, Peregian Breeze Estate and Marcus Beach were all ordered to leave immediately with an emergency warning in place.

Flames from a bushfire burning right behind houses in Peregian Springs lights up the Sunshine Coast sky. Residents are urged to leave the area now and evacuate towards Noosa. Credit: Declan Park. https://t.co/pKmMIyOIBV #7NEWS pic.twitter.com/N0qr1rfDYi

Queensland Fire and Emergency Service posted an urgent message online, urging all to depart the area as soon as possible with fears it wouldn’t be long before it would be too dangerous to drive. “Follow your bushfire survival plan now,” they wrote in a post on Facebook.

“If you do not have a plan, your safest option is to leave immediately if it is clear to do so. If you cannot leave, identify where you will seek shelter from the bushfire. If you are not in the area, do not return, as conditions are too dangerous.

They added: “The fire is expected to have a significant impact on the community. Conditions are now very dangerous and firefighters may soon be unable to prevent the fire advancing. The fire may pose a threat to all lives directly in its path. Fire crews may not be able to protect your property. You should not expect a firefighter at your door: act now.”

An evacuation centre has been set up at the Cooroy Library and Noosa Leisure Centre for residents who had fled their homes as they waited with baited breath to hear if they could head home or if their house would even survive the blaze. The cause of bushfire is currently being investigated with Sunshine Coast detectives revealing they are speaking to a number of teenagers in relation to the matter.

Terrifying scenes at Peregian Beach on the Sunshine Coast. Residents have been ordered to leave immediately. 📸 Sam Walker @10NewsFirstQLD pic.twitter.com/1oz5tTpDpw

Over the weekend Queensland Premier Annastacia Palaszczuk spoke out about the devastation explaining it hasn’t been easy on the young and old who were not expecting such conditions so early on in the year. “This is where they raised their children, their grandchildren, so we have a number of families at the moment that are actually going through some really traumatic times,” she said in a press conference on Saturday afternoon

Have you or any of your loved ones been affected by the bushfires? Do you have a message for the brave firefighters battling the blazes?