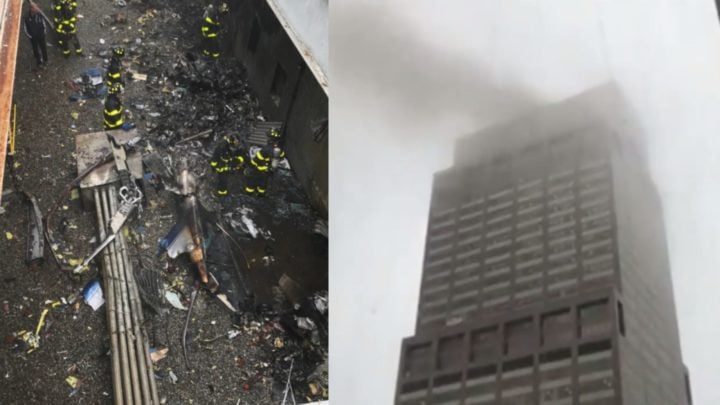 The pilot is reported to have radioed that he was in trouble shortly before the crash. Source: Twitter/FDNY & YouTube/MORETHANPLANET English.

A helicopter made an emergency “hard landing” in Manhattan overnight, crashing into the roof of a 54-storey Midtown skyscraper.

The pilot of the privately owned craft was killed instantly in the shocking collision which took place just before 2pm local time on Monday (4am AEST).

Horrifying footage of the incident has since emerged online, showing the helicopter struggling to maintain its position in the air before taking a nose dive towards the river below, with emergency services being called to the scene at 1.43pm after receiving reports of a crash.

The footage, which has been shared widely on YouTube and Twitter, does not show the moment of impact, but shows black smoke billowing from the top of the AXA Equitable building after a blaze was sparked, with several buildings nearby being evacuated as a precaution.

According to multiple reports, the pilot had radioed that he was in trouble shortly before the chopper went down. However emergency services and New York Mayor Bill de Blasio confirmed there was no reason to suspect the crash was an act of terror or deliberate.

.@NYCMayorsOffice has viewed video shot by eyewitness Wendy Slater and obtained by @PIX11News and tells CNN “Nypd sources believe it is and it looked like very erratic actions by a pilot in control.” Video was shot in Lower Manhattan before chopper was seen heading uptown. pic.twitter.com/dJ5RUDHmKB

Speaking at a press conference shortly afterwards, de Blasio described the incident as “very strange” and “troubling” as he confirmed that one person had died as a result.

“I want to say the most important thing first, there is no indication at this time that this was an act of terror and there is no ongoing threat to New York City,” he said. “There is no danger of any kind to New Yorkers at this point.

“One person died in this helicopter crash, that person is presumed to be the pilot. There does not appear to have been any passenger in the helicopter. We do not know the cause of this incident, but again we have no indication that there was any terror nexus here.”

Images from the scene of today’s helicopter crash at 787 7th Ave. in Manhattan. #FDNY members remain on scene. There is one fatality reported. pic.twitter.com/7qyyJWrMsw

He added: “There were no other injuries that we know of at this time. Thank God for that. This could have been a much worse incident.”

Images released by the Fire Department of New York revealed the charred aftermath of the crash, showing the remnants of the chopper as fire fighters worked to douse the flames.