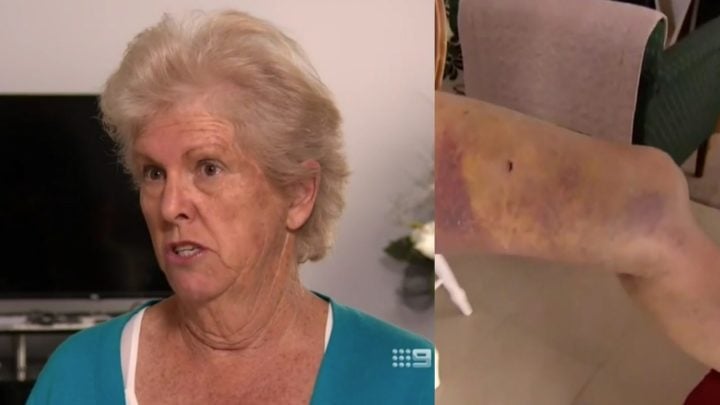 A grandmother has revealed her shocking injuries after the attack. Source: Nine News Perth.

A 72-year-old grandmother has revealed her horrific injuries following a violent home invasion, in what police believe could have been a case of mistaken identity.

Appearing on Nine News Perth, the woman – named only as Jill – revealed she’s now struggling to walk due to severe bruising up her leg after the brutal bashing.

Jill was allegedly attacked at around 6pm on Saturday at her home in Safety Bay, Rockingham. She claimed on air that one man knocked down her locked screen door before pushing her to the ground and kicking her.

“He was so so angry that he was… strong, I couldn’t have fought him off,” Jill recalled on camera.

Police reportedly believe it was a case of mistaken identity, and the “group of thugs” were actually looking for someone else following an earlier confrontation.

“He wouldn’t take no for an answer. He kept saying, ‘Where are they?'” Jill said of the leader of the group, according to Nine News.

While one man is now in custody, police reportedly need help finding the others – with around four people thought to have been involved.

“I just go over and over and over it in my head every night when I go to bed, just relive it,” Jill reportedly added. “There’s no real excuse for what he did because it was just so irrational, there was no sense to it at all.”

Jill has since urged other elderly residents to ensure they take care and keep their homes secure, to avoid anything like it happening to them.

“You hear on the news about the elderly people, I am probably more able than a lot of them but I am speaking for them,” she said, according to Nine.

WA Police Sergeant Paul Trimble appeared on air to brand the attack “cowardly”, adding: “Even if it was a mistaken identity, anyone would think as soon as they realised that that they would have stopped. But it appears in this case that they didn’t.”

It sadly comes after an elderly man was allegedly threatened and robbed by a group of children earlier this month, after they broke into his home armed with weapons.

Detectives reportedly managed to track down two of the alleged robbers including a 15-year-old and a 12-year-old after discovering a footprint in the backyard matching one of the boys’ sneakers. They were charged with aggravated home burglary over the alleged incident.

Have you or anyone you know been a victim of a home invasion? Do you think more needs to be done to secure elderly people’s homes?