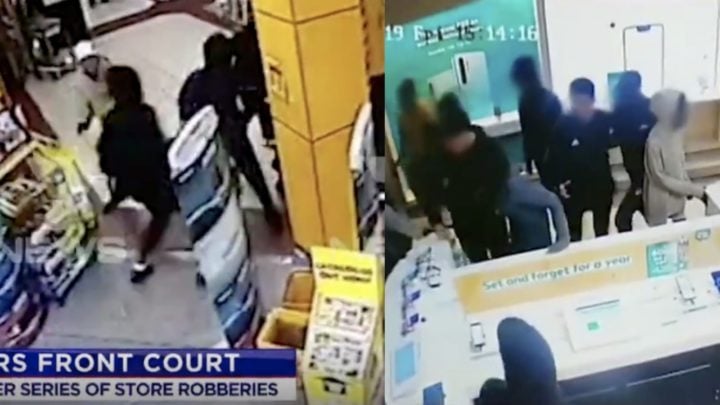 NSW Police have established a strike force to investigate the crimes. Source: Twitter/7News.

Shocking footage has been released which shows the moment a teenage gang stormed into a Sydney electronics store this week, allegedly making off with more than $15,000 worth of goods.

The clip shows the group of seven teenagers, described by New South Wales police as “young African males”, executing a grab and run robbery at a JB Hi-Fi store at Taren Point in Sydney’s south on Monday.

Four youths, aged 18, 17 and 16, were arrested for shoplifting following the crime, however the incident is not the only robbery to have taken place in the capital city in recent days as police were called to a total of six robberies in a three-day period, with all offenders described as being of “African appearance”.

While, in the past month alone, according to 7News, there have been a total of 20 of these grab and run style thefts.

“Officers are investigating, since March 2019, at least six incidents in which groups of young males, of African appearance, have entered retail electrical stores and stolen laptop computers, smart phones, smart watches and other devices,” a spokesperson said in a statement.

Retailers are calling for action after at least 20 electrical stores across Sydney were targeted in grab-and-run thefts. The latest incident saw $15,000 worth of goods robbed from a @JBHiFi store in Taren Point. https://t.co/IEoGEynaDx @sarinanastasi #TheLatest #7NEWS pic.twitter.com/1grtHFcEBN

NSW Police confirmed they have established a strike force to investigate the spate of thefts targeting electrical stores.

Detective Chief Inspector Glyn Baker added: “These thieves tend to grab valuable devices and run from the stores without a thought for innocent bystanders around them.”

Retail giant Gerry Harvey spoke out following the most recent theft, slamming the “little hoods” responsible, suggesting to 7News that security guards should be armed with laser guns.

“It’s bad when in the middle of the day, six little hoods can come in and ransack and rob and staff and everyone else just lets them go, which is fine,” he told the news program.

“But they know they can get away with it. The police force has to do something.”

CONFRONTING: An 81-year-old woman has been left with a broken pelvis after a group of teenage thieves knocked her over as they fled the scene. #9Today pic.twitter.com/0AeD5SWQa6

The most recent incident comes after an 81-year-old woman was left with a broken pelvis following a run-in with a gang of teen ‘grab and run’ thieves in Casula in April.

As the crooks fled the scene, having stolen a watch and a mobile phone from an Optus store, they collided with the elderly shopper, knocking her unconscious and in need of hospital treatment.

CCTV footage of the incident was released and shared widely online, as cops attempted to track down those responsible.