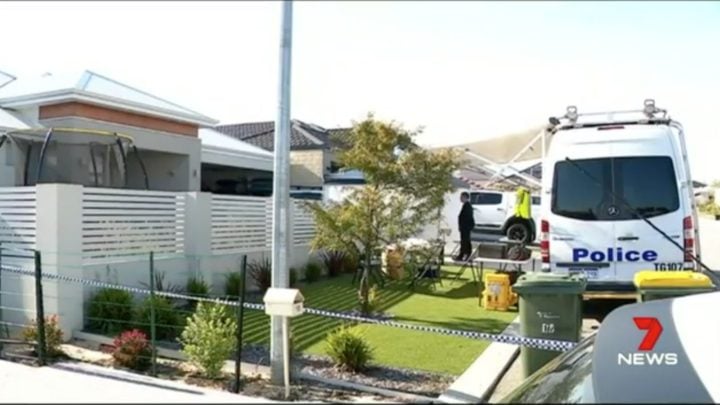 The bodies of two girls were found inside their home in Madeley, Perth. Source: 7 News.

Neighbours have described the horrific moment they watched the grandparents of two girls who were found dead in their own home collapse to the ground sobbing after hearing the tragic news.

The six and ten-year-old girls, named by multiple news outlets as Tiana and Mia Djurasovic, were found dead in their home in Madeley, northern Perth, on Friday. Their mother has since been arrested, with WA Police confirming she was rushed to hospital with self-inflicted wounds after being found nearby – but they aren’t thought to be life-threatening.

Speaking in an emotional press conference, Assistant Commissioner Paul Steel was unable to confirm who initially called them, but said: “This is a tragic event and our heartfelt condolences go out to the friends and family of the children.” It’s since been widely reported that the girls’ father was the one who found their bodies and called police.

Steel added: “Heartbreaking events like this have an effect not only on those directly involved, the friends and family, but on the wider community of Western Australia. I can assure the people of Western Australia that the WA Police are doing all that they can to investigate this manner and to try and identify what it is that led to these tragic events.”

The bodies of two sisters, aged 6 and 10, have been found at a home in Perth's northern suburbs. It's understood they were discovered by their father when he came home from work. https://t.co/Q3sTOgM8jX #7NEWS pic.twitter.com/nkNe4Xix5s

Speaking to The Daily Telegraph, neighbour Megan Bilaloski-Bain described watching the girls’ grandparents arrive shortly after hearing the news from their son-in-law, only for them to fall to the ground sobbing outside.

“It was horrible. They were walking up and down the street crying. They ended up on the grass, lying there, sobbing,” she said. “It’s so sad and you just wouldn’t expect it.

“We saw them just last weekend laughing on the trampoline. It breaks my heart.” Another neighbour, Emma, described seeing the girls’ grandfather wandering the street “crying and wailing in pain”.

Meanwhile neighbour Didi Lee, who lives opposite the family, said her 10-year-old daughter Evania was best friends with Mia. She added: “They are best friends. They play together and go to the park together, they are from the same school.”

Confirming the news in an initial statement, police said: “A woman, believed to be the mother of the children (girls aged 6 and 10) was located near a coastal carpark in the northern suburbs and conveyed by ambulance to hospital. The woman is currently under police guard and is yet to spoken to over the tragedy.”

The girls were both students at Ashdale Primary School where it’s been reported children will now be offered counselling to come to terms with the news. WA Police have asked anyone with information to contact Crime Stoppers.

Do you have a message for the family?