Female driver, 59, dies after being crushed by tree 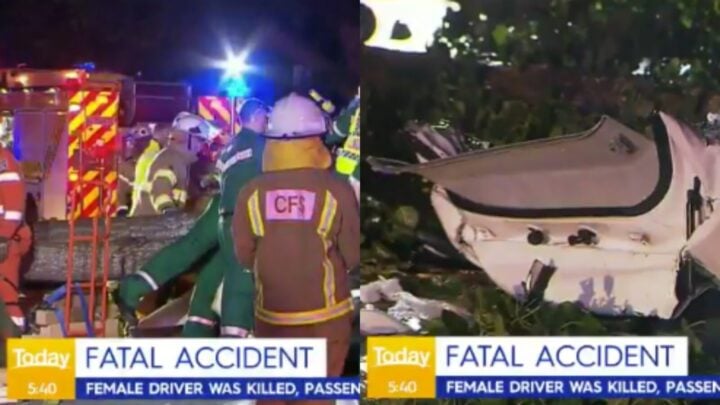 A 59-year-old woman has been killed in a freak accident after a tree branch fell onto her car after severe storms ripped across Adelaide overnight.

South Australia Police (SAP) said emergency services were called to Mount Barker Road, near Gould Road just after 10.20pm on Wednesday after a large tree branch fell on top of a white Toyota wagon that had been travelling west, crushing the 59-year-old woman who was at the wheel. A second car that had been travelling east was also hit by a branch.

Police confirmed the Crafters woman died at the scene. A 26-year-old Aldgate woman, who was sitting in the passenger seat, was taken to hospital for treatment of non-life threatening injuries.

The driver of the second car, a 56-year-old Aldgate woman, was treated at the scene but not seriously injured.

Mount Barker Road remains closed in both directions while the tree is cleared. The woman’s death takes lives lost on SA roads to 76, compared to 95 compared to the same time last year.

A woman has been killed in a freak accident when a huge limb of tree snapped and crushed her car at Stirling. Three of her passengers survived, one has been taken to hospital with non life threatening injuries @9NewsAdel pic.twitter.com/x24gFMEW6u

Sadly, this isn’t the first tree accident to occur this year. In August, a 59-year-old man died after a tree fell on his car after a huge storm ripped through Melbourne.

Victoria Police confirmed the man was leaving a shopping centre car park when a tree fell and crushed the vehicle. The man suffered life-threatening injuries and died.

“Police will prepare a report for the Coroner,” Victoria Police said in a statement at the time. “Anyone who witnessed the crash or who may have dashcam footage is urged to contact Crime Stoppers.”

On the same night, a 36-year-old woman also died after a tree fell on a vehicle in Fernshaw, in Victoria’s north-east. The driver, a 24-year-old Flinders man, was transported to a hospital with minor injuries.

A four-year-old boy became the third fatality after a gum tree fell onto him in Blackburn South. He was taken to the Royal Children’s Hospital with critical injuries but died overnight.