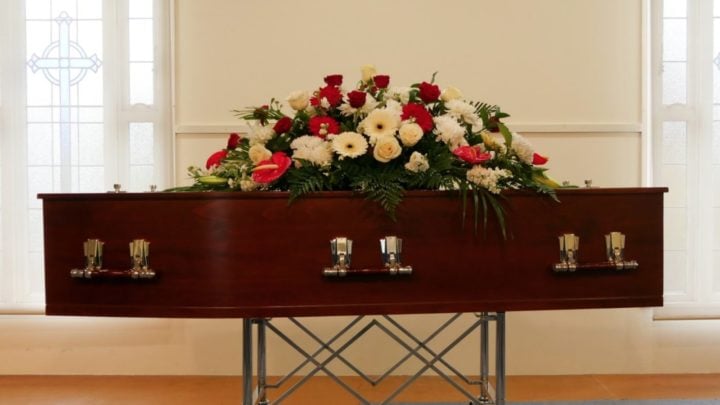 A husband has recalled how his wife began moving moments before being cremated. Source: Getty. (Stock image).

A husband has recalled his horror at seeing his ‘dead’ wife breathing just moments before she was due to be cremated – three days after she was placed in a cold coffin.

According to multiple reports, Phinij Sopajorn, 70, was pronounced dead in a hospital in Thailand on October 20 after suffering from swelling in her thyroid. She was later taken to a local temple in Thailand for a traditional Buddhist funeral, where she remained in a coffin for the next three days.

However, when her husband Thawin Sopajorn, 73, began to wash her face ahead of the official farewell ceremony and cremation – a traditional custom in the area – The Sun reports he suddenly noticed she was gently breathing and her eyes even flickered with the touch of the wet flannel.

Calling emergency services immediately, the husband then reportedly watched as they performed CPR and his wife was pronounced alive. Having laid in the cold coffin for three days, it’s reported she was immediately rushed into a warm space with hot water bottles to bring her body temperature back up.

“After she stopped breathing on Sunday we put her into the coffin and I thought it was strange that her body was not stiff. I bathed her and her body still moved,” the husband said, according to The Sun.

“Then during the funeral, I was the last person to touch her before the cremation. I wished for her to live a happy next life and then I saw her eyes start to move. I am so glad that I was right about her being alive. I gave her a hug and called my children, but they thought I had a hallucination.”

Sadly while she survived, it’s claimed the wife is not thought to pull through – with her husband describing her condition now as “severe”. He reportedly added that the family will continue to care for her for as long as they can.

It’s not the first time such a shocking incident has been reported. In 2018, Spanish news outlet La Voz de Asturias claimed a man in Spain who had been declared dead by three doctors was seen breathing and snoring on the autopsy table.

A family member claimed at the time that the man’s body had even been marked ready for the autopsy before the discovery was made. So how could this happen?

A neurologist at Dartmouth College’s Geisel School of Medicine in New Hampshire previously told Live Science in 2014: “You’re dead when a doctor says you’re dead.” Essentially, you can be declared dead when either tyou heart stops beating, or you’re declared ‘brain dead’.

To be declared brain dead, the patient “must have irreversibly lost function in all parts of his or her brain”, Live Science reported. Doctors will carry out several neurological exams to confirm this.

Have you ever heard of a terrifying incident like this?