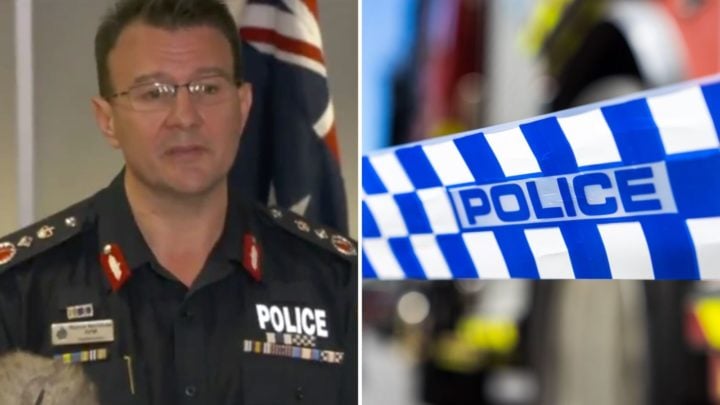 Four men are dead and one female is injured after a gunman opened fire in Darwin on Tuesday evening.

Northern Territory Police, Fire and Emergency Services confirmed that police received an emergency call at around 5:45pm on Tuesday about shots being fired in the Darwin CBD area and that an armed male offender was actively involved in the shooting.

A number of units were dispatched and the offender was taken into custody after a series of crime scenes were declared by police. Active crime scenes included the Buff Club, Gardens Hill Crescent, the Peter McAulay Centre and the Palms Motel. At this stage it is believed the victims were shot at different locations.

“This is one individual who has acted individually and unfortunately, taken the action they have,” Commissioner Reece Kershaw said. “He is currently being held in custody at the hospital at this point in time.”

Police confirmed there wasn’t a second shooter involved and that the offender was “well known” to police.

“He has a number of interactions adverse with the police force. He is well known for us,” Kershaw said.

The man may also have been involved in bikie gangs.

Kershaw also confirmed the gunman was on parole and that he was released from prisoner in January. The gunman is believed to have been wearing a tracking device at the time of the attacks.

Chief Minister Michael Gunner described the events as a “devastating day” for the Northern Territory and that 100 police were involved in multiple crime scenes across the city.

“This is not the Darwin we know,” he told reporters.

The shooting remains an active police investigation and there are a number of details still to be confirmed by authorities.

“I can confirm we do not believe this is a terrorism incident,” Gunner said. “This may be an event you prepare for, but this is never an event you want to respond to.”

Gunner described the night as “difficult” and police are still trying to establish the intent and motivation behind the incident. Police are also working out the sequence of events and putting the full crime scene together.

It is believed the man used a vehicle to transport himself between locations on Tuesday evening and the car has been located by police.

The offender also asked police to place him in protective custody following the shootings. Kershaw said that at this stage, it is believed the offender used a shotgun to carry out the attacks but it’s not yet known if the weapon was legally obtained.

The offender is thought to have sustained an injury during the attacks but hasn’t been charged with anything at this stage.

Police are also yet to confirm if the victims were known to the attacker or if the attacker was under the influence of drugs or alcohol at the time of the attacks.

“When we have that information we will be happy to share that with you,” Kershaw said.

Meanwhile, Scott Morrison has released a statement about the incident from London.

“This is a terrible act of violence that has already, I’m advised, taken the lives of four people,” he said. “This is a very tight community and know they will be rocked by these events.

"This is a terrible act of violence": Prime Minister @ScottMorrisonMP is in London and has made a statement on the mass shooting in Darwin that has claimed the lives of four people. #auspol #TheLatest #7NEWS pic.twitter.com/FwsPnrkiso