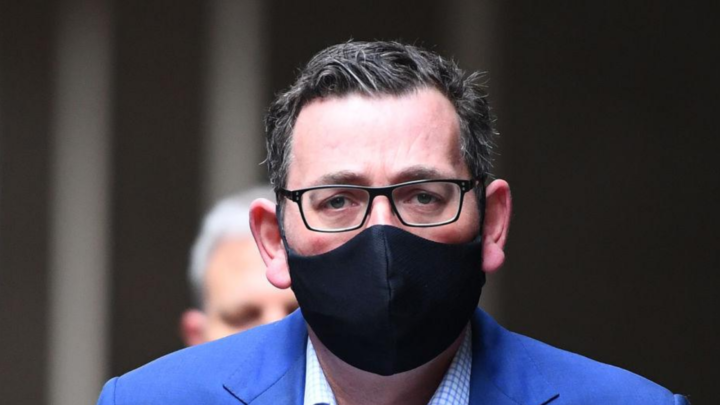 The Victorian Premier doesn't think some aged care facilities are fit for his own mother. Source: Getty.

Victorian Premier Daniel Andrews admitted he wouldn’t let his own mother live in some of Victoria’s aged care homes, namely those that have been hit with Covid-19 outbreaks. The premier also announced 384 new coronavirus cases in the past 24 hours and six more deaths, four of which were linked to aged care as well as one person in their 60s.

During his daily public address on Tuesday, Andrews was asked by a journalist if he would be happy for his 75-year-old mother Jan to reside in any of the facilities that have contributed to the 769 active coronavirus cases that are currently linked to aged care, of which fewer than 10 are connected to the public sector.

“Well my mother is in her mid 70s, she has some underlying health conditions but she lives at home,” he said. “Some of the stories we have seen are unacceptable and I wouldn’t want my mum in some of those places but that’s not a matter for me. I can’t change that … I would not let my mum be in some of these places. I just wouldn’t. But that’s not a decision I have to make at the moment because she’s living at home.”

He also declared he didn’t have any confidence that the staff and management in the state’s private sector aged care facilities were able to provide the appropriate care to keep their residents safe and said it was clear some were “struggling to maintain staffing levels and basic standards of care”.

The comments come after aged care workers scolded Minister for Aged Care and Senior Australians Richard Colbeck for saying on Monday that he believed nursing homes were responding “exceptionally well” to the outbreaks. Workers accused Colbeck of downplaying the safety concerns that were reflected in a recent survey from the United Workers Union that showed two-thirds of all aged care workers didn’t feel prepared for the outbreak.

During his address, Andrews also announced the suspension of all non-urgent elective surgeries – excepting Category One and urgent Category Two – to allow state health workers to be diverted to treat aged care patients. He clarified that it wasn’t about a lack of equipment but a need to free up staff and beds for more urgent cases.

Do you think something needs to change in the private sector?