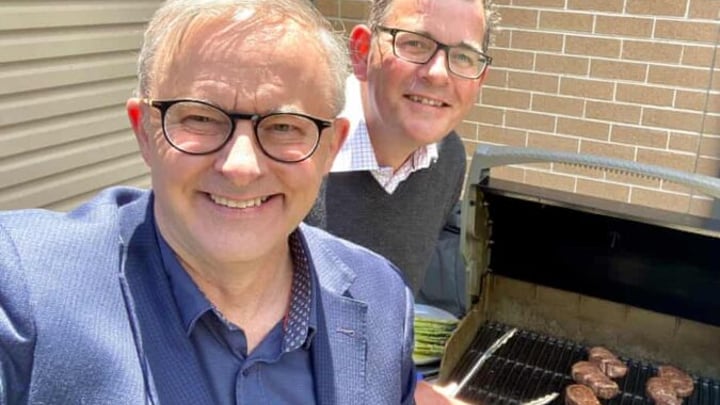 Dan ANdrews and Anthony ALbanese have been accused of staging a barbecue photo. Source: Twitter

When Opposition Leader Anthony Albanese posted a harmless selfie of his barbeque catch up with Victorian Premier Daniel Andrews to Twitter, he thought it would be a nice post, showcasing his close friendship with his Labor colleague and former housemate. However, what Albanese didn’t expect was the throng of conspiracy theories sparked by the post, sent by fired up Australians.

The post in question, showed Albanese in a blue blazer and matching blue, buttoned shirt, wearing black-framed glasses, as he smiled into the camera. Behind him, Dan Andrews smiled at the camera, wearing a grey jumper over a checked shirt, and also wore his signature lenses. Andrews is seen holding silver tongs, and the gentlemen are situated in front of a barbecue.

This barbecue, and the steaks atop it, quickly became the centre of intense speculation of a “fake”or “staged” photo. Many people noted the clean barbecue and tongs, the steaks appearing cooked, but with no grill lines, and the barbecue having no burners turned on.

If those steaks were cooked on that bbq, how is it so clean? Where are the grill lines? Why is it off? pic.twitter.com/lg4qH1Um4k

Cooking with no flame? You are men of talent I suppose

BBQ is off, steaks look to be cooked in a pan, why stage this?

Great to catch up with my friend and former housemate @DanielAndrewsMP, who cooks a great bbq. pic.twitter.com/BL31nfF3fx

“Yeh beautiful day! Come round for a barbie mate…”
“Sweet, you got somewhere we can sit?”
“Yeh out the front of the house on the driveway, right in front of the garage door”
“Ah too good, perfect spot… I’ll marinate some Asparagus and be round in a sec”

Said no one ever…

However, the most notable of the conspirators was Jason Wood, a Member of Parliament for Berwick, in Victoria. Wood criticised the Labor Leaders for their”photo opp [sic]”.

To Wood’s comments, Andrews replied during a press conference on Tuesday, November 30, denying the allegations of a photo opportunity, and of staging the photo. Andrews hit back at the fiery criticism saying that the steaks were seared before cooking on the barbecue to ensure the steaks would be cooked properly.

“The gas was on,” Andrews said. “Searing a steak before you put it on the barbecue is not the most novel thing ever. Maybe I should have taken a wider shot for the side burner which had a frying pan on it.”

“I can assure you the asparagus went onto the barbecue and was cooked.”

Andrews also rallied back against speculation about his and Albanese’s attire “It was windy and not that warm. That’s why I had a jumper on.”

“Who’s that joker Jason Wood – if I were him I’d be out campaigning, given the way they’re travelling at the moment, rather than commenting on my barbecuing skills.”

It seems these fiery comments from Andrews have put this whole barbecue bungle aside to rest, with Andrews essentially saying that the entire debacle was a missed steak, oops, mistake.