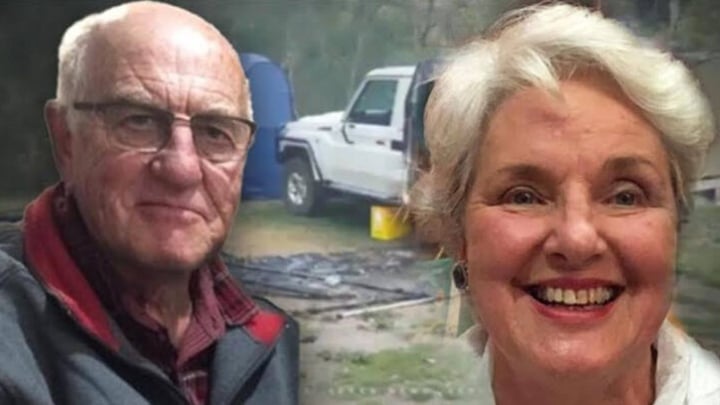 Detectives are still searching for a trailer that is alleged to have been used to transport the bodies of Russell Hill and Carol Clay. Source: Instagram/ @caffeinecrimeandcanines

A crucial piece of evidence in the murder investigation of Victorian campers Russell Hill and Carol Clay remains missing as police appeal for information as to its whereabouts.

Investigators are still searching for a trailer that is alleged to have been used to transport the bodies of Russell Hill and Carol Clay following their alleged murder in Victoria’s High Country.

Despite a public appeal for information on the location of the trailer, no leads have been made in locating the piece of evidence.

Victoria Police told The Herald Sun that they were working on a theory that the trailer was sold on Gumtree between March and July 2020.

“Investigators have been working with Gumtree to examine sales of trailers matching the description in that time period but have not located it at this stage,” police said.

Police initially focused their investigation on a blue four-wheel drive that was towing a trailer, believed to be a mid to late 1990s model Nissan Patrol, which was seen in the area at the time of the couple’s disappearance.

At the time Victoria Police Detective Inspector Andrew Stamper said police have “not been able to eliminate this blue four-wheel drive from our enquiries”.

“We have witness statements that put this blue vehicle and its trailer in the valley at the time Russell and Carol were there, and indeed near the spot that they had set up their camp,” he said.

“Detectives have also been given information that a vehicle attempted to leave the valley late at night on the evening of Friday 20 March, but the Myrtleford gate was closed because of the bushfires, meaning that the driver had to make a complicated turn back in the direction from which they had come.

“That same vehicle is also spotted on two cameras at the top of Mount Hotham, consistent with where a vehicle would exit the valley given the closure of the Myrtleford gate.”

The trailer is believed to be a key piece of evidence in the upcoming trial of the man accused of murdering the couple, Gregg Lynn, who recently fronted court.

Gregg Lynn, 55 appeared via video link in Sales Magistrate Court on Tuesday, May 31 from the Melbourne Assessment Prison, where he has been held for the past six months.

Defence lawyer Chris McLennan told the court that he was seeking a lengthy adjournment to the case, claiming the police exhibits provided to the defence were in digital form and could not be accessed by Lynn.

“The brief has arrived in a digital form and my client hasn’t got access to a computer, as I understand it the prosecution needs about eight to 10 weeks to get exhibits and other transcripts,” McLennan said.

The prosecution also indicated to the court that they required additional time to organise transcripts and exhibits.

The case was adjourned to August 23. Lynn didn’t make an application for bail.

Lynn was arrested in relation to the camper’s disappearance on November 21, 2021 and was later charged with two counts of murder after he was questioned for several days by police.

Russell Hill and Carol Clay were last heard from on March 20, 2020 when they were camping in the Wonnangatta Valley. The couple’s campsite was discovered by campers on March 21 allegedly destroyed by fire near Dry River Creek Track, Hill’s vehicle was found with signs of minor fire damage.