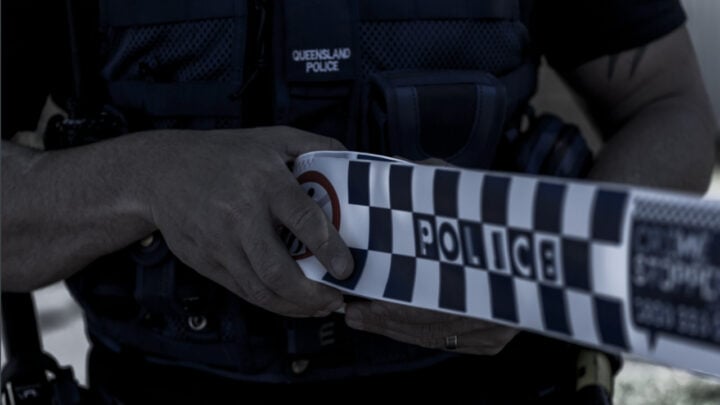 Detectives investigating the pair's final movements are now appealing for information from the public. Source: Twitter/@QldPolice

Queensland Police have confirmed the identity of one of the two decomposed bodies discovered in Queensland’s Gordonbrook Dam on Saturday, March 19.

Police have released the name and a picture of a 51-year-old Kingaroy man who was located deceased in Gordonbrook Dam, South Burnett, on Saturday. https://t.co/cN5AoYaauu pic.twitter.com/utdY8EQVlL

The identity of the woman aged in her late forties is still yet to be identified.

“It’s not until that has been undertaken that we will be able to state how these two people have died,” he said.

“At this stage, we are not looking for any other person involved.

“I’m not saying it’s not suspicious, what I’m saying is we go into these investigations open minded as to what has occurred.”

McCusker also confirmed earlier reports that the pair were tied together.

“The two people were connected by a chain,” he said

“There is a suggestion they may have been weighted.”

A kayaker made the gruesome discovery around five meters from the shore of the dam on Saturday afternoon. A crime scene was declared shortly after while emergency services assisted with retrieving the bodies.

The bodies are believed to be badly decomposed with 9 News reporting they were allegedly tied together and had been in the dam for a month.

Although investigators are yet to identify the pair, the remains are believed to be that of a local man aged in his fifties and a local woman aged in her late forties. A post mortem is expected to be conducted in the coming days.

A crime scene has been declared following the discovery of two bodies in Gordonbrook Dam, South Burnett this afternoon. https://t.co/KArU8NVvbs pic.twitter.com/M4VRKV1XTx

Detectives investigating the pair’s final movements are now appealing for information from anyone who saw their white 2004 Holden Commodore station wagon parked in the picnic area of Gordonbrook Dam.

The vehicle is believed to have been parked at the damn since February 22 and anyone who has seen the vehicle is urged to immediately contact police.

Police investigating the deaths of two people at Gordonbrook Dam near Kingaroy are appealing for anyone who saw their vehicle parked at the dam. https://t.co/0UdB5VfjQl pic.twitter.com/Xluc4aG6pv

South Burnett Regional Council issued a statement addressing the “queries on water quality” following the discovery of the bodies.

“Council undertakes regular testing of the water supply, both raw and treated water from Gordonbrook. This monitoring ensures all water meets health guidelines before it is let into reticulation system,” the statement said.

“In recognition of this issue, Council has this evening ensured the water supply from Gordonbrook will temporarily cease and will take 100% supply from Boondooma Dam.