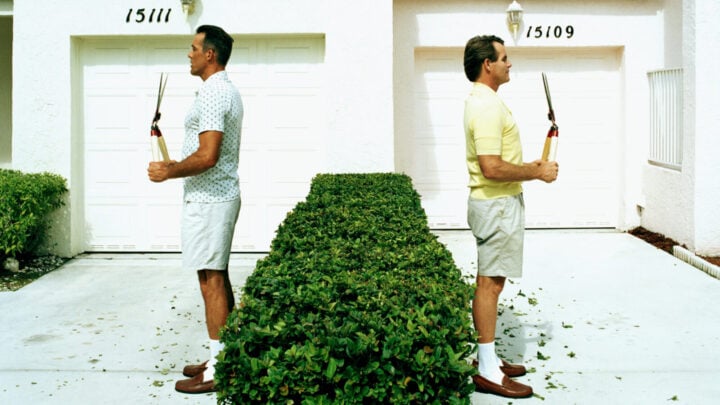 Getting along with your neighbours isn't always easy. Source: Getty

A year-long neighbourhood dispute has resulted in a particularly creative and hilarious solution.

According to The Sun, which originally published the story, the dispute between the two neighbours broke out over a tree that sat between their properties.

Bharat Mistry, 56, and neighbours Graham and Irene Lee, both in their 70s, had been arguing about the tree for over a year. The tree was on Mistry’s property, but its branches overhung the Lees’ driveway. Mistry said he was when the Lees called in tree surgeons to saw the tree exactly in half, with pictures of the tree’s interesting trim now flooding social media.

Mistry told The Sun the 16ft tall Fir Tree had been in the same spot for 25 years and his family were “gutted” to see it damaged.

According to Mistry, the Lee’s had been frustrated with branches hanging over their driveway and complained birds in the tree were making too much noise and mess of his bungalow in Brier Close, Waterthorpe..

A neighbour didn’t like the fact that branches from this tree were hanging over their drive, so they got their shears out and trimmed it back.

“It has been there for 25 years and we’d trimmed into a ball shape with an agreement with the neighbour and he has been fine about it,” Mistry said. “But recently there have been birds in the tree which you would expect at this time of the year.”

Mistry said he and his family watched on in horror as the tree surgeons hacked away at the tree, and couldn’t understand why it had become an issue now, after 25 years.

“We were absolutely distraught. We pleaded and pleaded with them not to do it, but their mind was made up. That tree was coming down,” he said. “I believe he has the right to cut down anything that is overhanging onto his property.

“But you have to ask, why after 25 years would you do that? It must have been no more than 3ft onto his land. It is above head height, the bottom of the branches start at about 8ft high and we have cut off the branches lower down to be amiable with them.

“He can get his car on and off the drive with no issues. We had asked if we could get it trimmed back and put a net in it so it would stop birds getting in, but there was no compromise with them.”

Misty said the tree had never been an issue until Covid-19 lockdown, revealing that while he complains about birds, his young daughter who’s room is nearest to the tree “can’t hear anything”.

“He used to bring the bins in for us, it’s such a shame it has come to this,” Mistry said.

British TV show Jeremy Vine, which airs on Channel 5, shared footage of the tree on their Twitter, alongside the question “Has this got out of hand?”.

One person commented writing, “The neighbour is well within their rights to do this. If you want to avoid this situation, plant your tree in the middle of your own garden and not on property boundaries.”

While another said: “It seems a bit petty, but they are entitled to do it, they have done nothing wrong. I would be more concerned about the roots under my driveway to be honest.”

Do you think they were out of line?