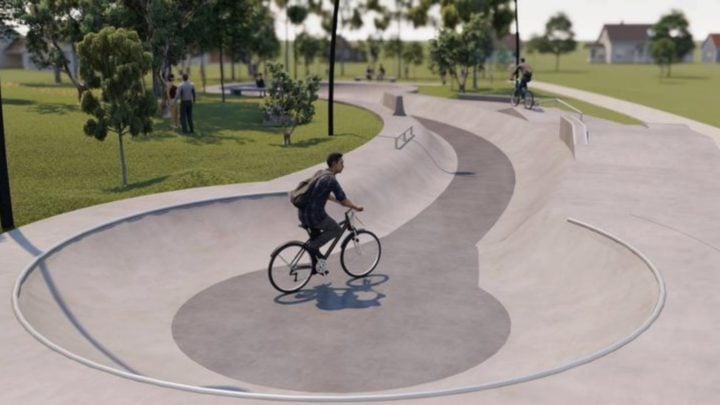 An Aussie council has been left red-faced after sharing a series of aerial images of its new skate park design proposals online – with one appearing very X-rated and sparking a hilarious reaction online.

Adelaide’s City of Tea Tree Gully asked residents on Facebook to cast their votes on their favourite proposed designs for the skate park in the area, with several concepts to choose from. But it was the first interesting shape that really raised eyebrows.

The design’s phallic appearance was noticeable almost immediately, but the council’s team only spotted it themselves after being mercilessly mocked online. They quickly changed the initial image on the page and, proving they could see the funny side, wrote: “AWKWARD! We’re feeling a little red faced here after posting our skate park design.

“We’ve changed the photo to one that more accurately reflects what people might expect to see from ground level, as we would hate to set up false expectations – too much pressure for a skate park. Thanks to all the clever people in our community for your ‘helpful suggestions’.”

The comments have continued nonetheless, with one person writing: “How long will it take to erect?” while another joked: “Oh you go concept option 1 every day of the week. Would be a k**b not to.” And one person added: “Don’t be to hard-on yourselves.”

Elsewhere one person joked: “So are the bushes and fountain additions going ahead or?” and one wrote: “You don’t want too much pressure. Need to make sure this situation has a happy ending…”

It’s not the first time a seemingly innocent job ended in an X-rated accident. In January this year The Bureau of Meteorology in Queensland shared an image of a cyclone redeveloping at sea. While it was a serious matter for people in the Sunshine State, others made light of the situation pointing out the storm system’s phallic appearance.

“Tropical #CyclonePenny has redeveloped over the northwest Coral Sea,” the message read. “Penny, Category 1, is expected to continue moving east away from the #Qld coast as it develops further.”

Tropical #CyclonePenny has redeveloped over the northwest Coral Sea. Penny, Category 1, is expected to continue moving east away from the #Qld coast as it develops further. Check https://t.co/rVLE6inkt8 for the latest! pic.twitter.com/zTYJUeHI2q

It didn’t take long for people to realise that the cyclone had actually taken the shape of male genitalia though, as one person joked: “Surely someone at the Bureau cocked this up!”

Another message read: “I’m sorry but your drawings shouldn’t be so specific.” A third added: “It’s quite possible that nth qld is about to get a few good inches,” while another person said: “Urine trouble now”.

And months before that it was a balls-up for French Open staff members on day eight of the competition last year when a humorous image was accidentally created on the court prior to the first match. Busy sweeping the clay at Roland Garros, the officials accidentally brushed a penis shape into the court, with a probably chuckling photographer capturing the mishap and posting it online.

Although quickly swept away when noticed, the surprising and humorous incident provided a few laughs for tennis fans across the world, who have eagerly watched their favourite athletes battle it out in Paris.

Did this make you laugh?