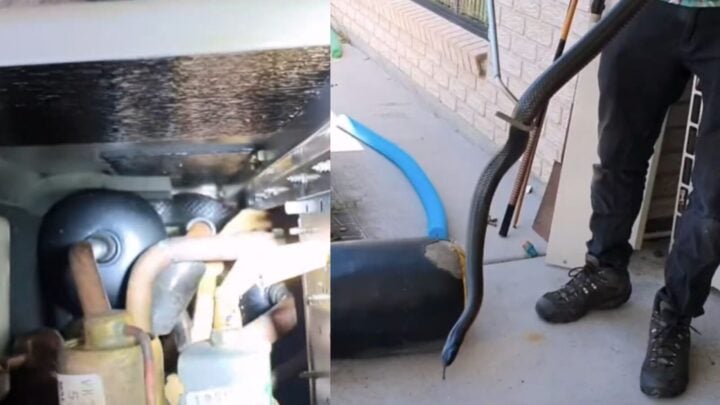 Residents of a Sunshine Coast home were in for more than they bargained for when a venomous red-bellied black snake was found tucked in the depths of their aircon unit. The team at Sunshine Coast Snake Catchers 24/7 posted the unsettling video on their Facebook page showing the snake wrapped up around the very back of the aircon unit, almost hidden entirely from plain sight.

Stu from the snake catching team described the venomous reptile as “very healthy” and said it would probably appreciate being relocated to a more appropriate location after the 45-minute-long rescue mission.

“Whats the go with venomous snakes in aircon units lately haha. This took ages to get the snake out but we got there eventually. Before any aircon guys or sparkies [sic] have a heart attack I had all of the power off to the aircon before poking around.”

The video showed the snake being removed from the aircon unit before it quickly tried to escape back up another pipe. But after being pulled out once again, the snake was met with some frightened screams by the owners of the house before it was safely put in the catch bag and released back into the bush.

People in the comments were impressed by the seamless catch with one writing: “You worked for your money on that one Stu”. Another was clearly less excited when they wrote: “So glad I didn’t see this page before we went to the Sunshine Coast”.

While a fellow snake-fearer wrote: “I’m bloody screaming, I don’t even like worms xx love to you all and stay safe xx”.

According to the Australian Museum official site, red-bellied black snakes are one of the most frequently encountered snakes on the east coast of the country and hand out a generous amount of bites each year. If injected, their venom can have symptoms including bleeding, swelling, nausea, vomiting, headaches, abdominal pain, diarrhoea, sweating, muscles pain and weakness and red-brown urine.

It is however likely the least dangerous elapid snake in Australia and despite the high number of bites, very few actual deaths have occurred with most on the record coming from earlier times when the snake’s identity couldn’t be confirmed.

Do you like snakes? Have you found one in your house?