Cheap whisky and Marmite: What the new UK trade deal means for you 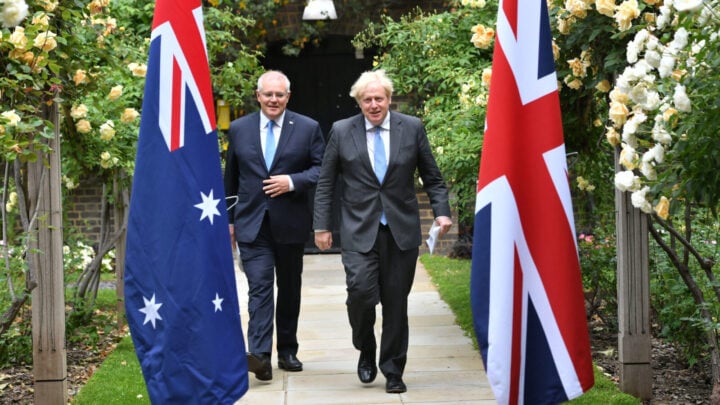 Australian Prime Minister Scott Morrison and British Prime Minister Boris Johnson have reached an in-principle trade deal dubbed the “most comprehensive and ambitious agreement” yet. The deal will be a win for Brits abroad and Aussie farmers, but what exactly will the agreement mean for you?

Australia hashed out the in-principle free-trade agreement with Britain over dinner on Monday evening at London’s Downing Street, and on Tuesday morning announced the details of what will be the first major change to trade rules with the UK since 1973.

The free-trade deal will see iconic British products such as cars, Scotch whisky, biscuits and ceramics become cheaper, as tariffs on UK exports are eliminated. According to the UK government, the deal will boost UK industries that employ 3.5 million people across the country and grow the UK-Australia trade relationship, which was worth £13.9 billion [$25.5 million] last year. Morrison told reporters at Downing Street that it was a “win” for both nations.

“I said we would wait for the right deal, and I think we’ve got the right deal between the UK and Australia,” he said. “This is not a standard cookie-cutter agreement. This is an agreement of great ambition for both countries. It shows, I think, a great deal of confidence [and] is like moving to a very different and new era of engaging the free trade.

“Our economies are stronger by these agreements. This is the most comprehensive and ambitious agreement that Australia has concluded.”

In 2020, Scotland exported £126 million [$231 million] of beverages to Australia, with the new deal set to help distillers by removing tariffs of up to 5 per cent on Scotch whisky. While car manufacturers in the midlands and north of England will also see a 5 per cent cut to tariffs. In Northern Ireland, tariffs will be removed for machinery and manufacturing goods, 90 per cent of which are sent to Australia and used extensively in Australia’s mining, quarrying and recycling sectors.

The deal is also a big win for Australian farmers and producers, with Aussie products set to fill UK shelves as export becomes cheaper and easier. Johnson said people in the UK could look forward to paying less for “Australian favourites like Jacob’s Creek and Hardys Wines, swimwear and confectionery”.

Aside from exports, the deal will also pave the way for more Australians to live and work in the UK and vice versa, in what Morrison described as a “brain gain” for both nations. It will scrap the current requirement for British backpackers to work on Australian farms for 80 days before extending their visas, and allow for freer movement for both young Brits and young Aussies between countries.

“There is a great opportunity, though, for young people from both the United Kingdom and Australia to move and operate and work in different countries,” Morrison said. “That builds the capacity, I think, in both countries, with that easy engagement. I mean, collaboration is so critical in so many fields, and a shared experience of each other’s societies and economies is a good thing. So we go onto this boldly and confidently, and it’s a great opportunity for people of both countries.”

The full details of the agreement are yet to be finalised, and the parliaments of both countries will need to approve it before it takes hold.

What British item would you most like to see come down in price?