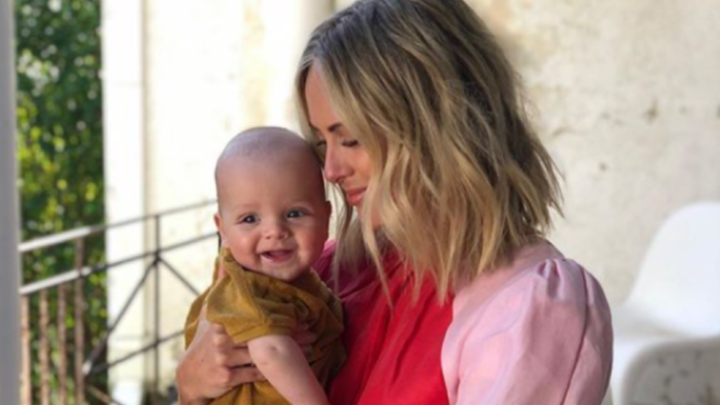 Sylvia and Peter welcomed their son Oscar into the world in February. Source: Instagram.

Sylvia Jeffreys and husband Peter Stefanovic welcomed their first child together in February this year, but now the Today Extra host has opened up on her journey to conceive.

Speaking candidly during Wednesday’s episode of the Channel Nine show, the 34-year-old journalist revealed she underwent IVF in order to have son Oscar with 38-year-old Sky News presenter Peter.

Sylvia and co-host David Campbell were chatting to mother Brooke Campbell about IVF, and more specifically the difficult decision of what to do with unused embryos after couples have decided not to have any more children, when she made the admission.

“Such an emotional attachment to those embryos, long before they become the baby or the child that you grow to love,” Sylvia said, before revealing it was a matter close to her own heart.

“Brooke, I know from my personal experience with IVF that so much goes into having a successful embryo,” Sylvia added, fighting back tears. “Having something sitting there that gives you the opportunity to make life for your family. How are you and your husband coping?”

'Can't bring myself to do it': the moral dilemma facing parents of IVF babies. #9Today pic.twitter.com/DHh2Hq776V

“The silver lining in having unused embryos is that you’ve had your miracles. You’ve had your babies. So that’s the beautiful part of it,” Sylvia added, wrapping up the heartfelt interview.

Sylvia and Peter, who tied the knot in NSW’s Kangaroo Valley in 2017, announced the birth of their adorable son via Instagram in February, and treated their followers to a handful of heartwarming snaps of the new bub.

“We’ve got our own Oscar!” Peter wrote. “I’m so unbelievably proud of @sylviajeffreys and our new best mate. Love is strong. Life is fantastic.” The proud new dad posted the caption alongside a photograph which showed glowing new mum Sylvia cradling her baby boy in her arms as she smiles down sweetly at him, while Oscar sleeps soundly wearing a blue Winnie the Pooh sleepsuit.

Do you know someone who has gone through IVF?