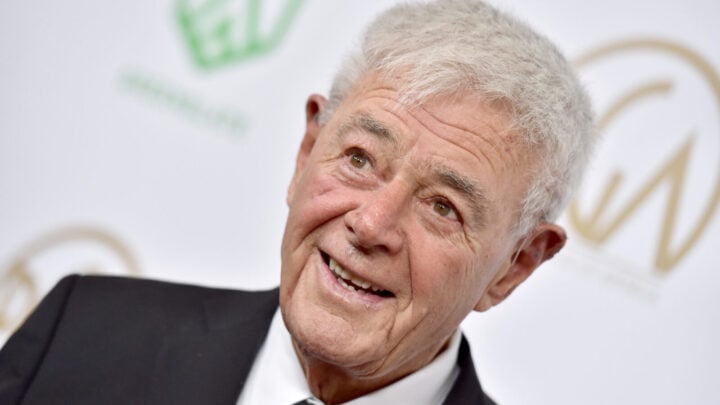 Richard Donner died on Monday at the age of 91. Source: Getty

Richard Donner, who directed TV series such as Get Smart, The Twilight Zone and Gilligan’s Island, and hit films such as Christopher Reeve’s Superman, has died at the age of 91.

Donner’s death was confirmed to Deadline by his wife Lauren Shuler Donner. The cause has not been revealed, however his wife confirmed that he passed away on Monday.

Following the sad news, tributes have poured in from all over Hollywood, with fellow director Steven Spielberg leading the way. Spielberg worked with Donner on the 1985 cult film The Goonies.

“Dick had such a powerful command of his movies, and was so gifted across so many genres,” Spielberg said in a statement to Variety. “Being in his circle was akin to hanging out with your favourite coach, smartest professor, fiercest motivator, most endearing friend, staunchest ally, and — of course — the greatest Goonie of all. He was all kid. All heart. All the time. I can’t believe he’s gone, but his husky, hearty laugh will stay with me always.”

The Goonies actor Sean Astin wrote on Twitter, “Richard Donner had the biggest, boomiest voice you could imagine. He commanded attention and he laughed like no man has ever laughed before. Dick was so much fun. What I perceived in him, as a 12 year old kid, is that he cared. I love how much he cared. Goonies Never Say Die.”

Donner directed some of the most iconic films from the 1970s and ’80s, including 1978’s Superman and the Lethal Weapon films. Donner also executive produced the 2000 hit film X-Men.

Mel Gibson, who starred alongside Danny Glover in the popular Lethal Weapon series, said, “Donner! My friend, my mentor. Oh, the things I learned from him! He undercut his own talent and greatness with a huge chunk of humility referring to himself as ‘merely a traffic cop.’ He left his ego at the door and required that of others.

“He was magnanimous of heart and soul, which he liberally gave to all who knew him. If we piled up all the good deeds he did, it would stretch to some uncharted place in the firmament. I will sorely miss him, with all his mischievous wit and wisdom.”