‘The heart of our family’: Miranda Kerr’s special tribute to her late nan 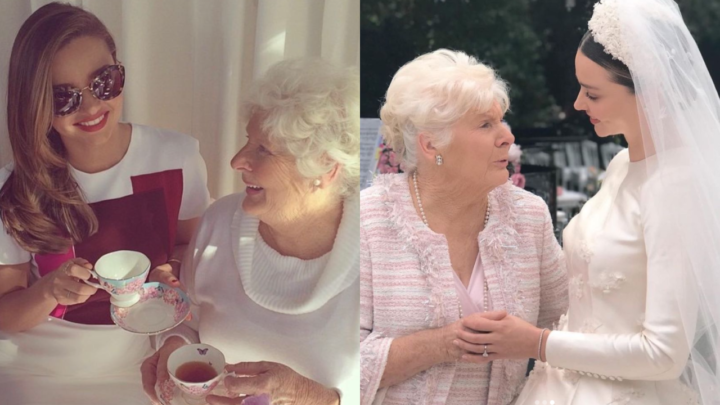 There’s a special bond between grandparents and grandkids, and that rings true for Australian supermodel-turned-skincare-mogul Miranda Kerr, who has shared a heartfelt tribute to her beloved ‘nan’ Ann, who passed away last week. The sad news comes just two weeks after Miranda announced she had buried her beloved grandpa.

Taking to Instagram on Tuesday, the 37-year-old described Ann, who died on Saturday, as “the heart of our family”, and praised her for making her the woman she is today.

She accompanied the tribute with three beautiful photos. The first image shows Miranda and Ann sipping tea together, which appears to be a throwback to the 2014 launch of Miranda’s Royal Albert tea collection, which Ann helped inspire, while the second photo shows Miranda as a baby in her grandmother’s arms. And the third image appears to be from the supermodel’s wedding to Snapchat co-founder Evan Spiegel in 2017.

Miranda added: “You’re the reason I am who I am. You’ve taught me how to love, care, cook, have faith, have grace, dress, take care of myself, my husband and our children. You also taught me how to pray, how to find humor [sic] and how to have compassion.

“Please know I could never have been who I am without you, your love, your influence and your support. I am who I am because of you and I promise to carry your legacy, your love and your light in this world as long as I shall live.

“Give Pa a big hug from me,” she concluded. “I love you both more than words could ever express.”

It didn’t take long before fans of Miranda’s shared their condolences, with one writing, “Darling Miranda, how beautiful to have a love like this & a bond so deep. Thinking of you and your family.” Another added, “I’m so sorry for your loss. It’s truly heartbreaking. Sending you love.”

Last month, Miranda announced she had buried her beloved grandpa Pete. “Today we laid my grandfather’s body to rest but his spirit will continue to live through our family and all those he loved,” she wrote on Instagram on February 15. “One of my favorite [sic] recent memories with my Pa was listening to Glenn Miller, enjoying the sunshine on our backs and smelling the gardenia from our garden that Hart had picked for us.”

Do you have a close bond with your grandchildren?