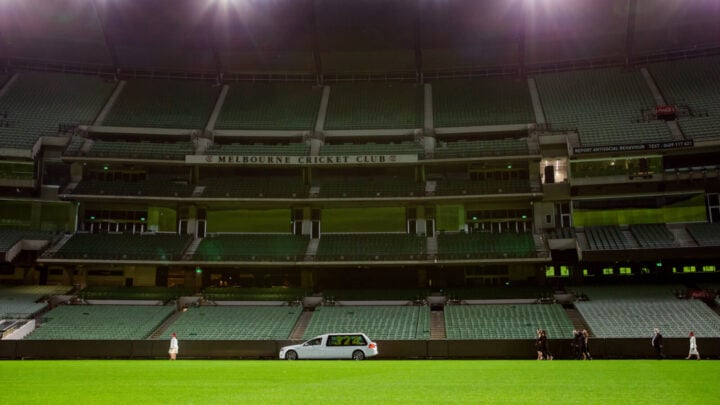 Dean Jones has been farewelled in a moving private ceremony at the Melbourne Cricket Ground. The legend of the game was given a fitting send off, as his coffin was taken for one final lap of honour around the iconic sporting stadium, where he played on many occasions.

Jones’ coffin was covered with the Australian flag and the hearse also carried an elaborate floral arrangement bearing the number 324 arrangement, which was Jones’ Australian Test cap number. The number was also his highest first-class score achieved for Victoria against South Australia on the MCG in the 1994/95 Sheffield Shield season.

The Melbourne-born sportsman passed away on September 24 after suffering a fatal heart attack in Mumbai. The 59-year-old was working in India for broadcaster Star Sports where he was commentating on the IPL alongside former player Brett Lee. According to multiple reports, Jones suffered a heart attack in the lobby of a Mumbai hotel and Lee attempted to save him by performing CPR. He was rushed to the hospital via ambulance but sadly could not be saved.

As footage of the private service – which was limited to just 10 people due to Covid restrictions – was shared on social media, fans paid tribute to the sporting hero who was part of the Australian team that won the 1987 World Cup against all odds, beating rivals England in the final. He is also credited with revolutionising the way the one-day game is played.

“A million Aussies would have filled the stands if they could to see that fella off. Champion R.I.P,” one fan wrote. Another commented: “Deserved a full stadium but still a great way to send him off.”

Jones’ wife of 34 years Jane shared a heartbreaking tribute to her “beautiful husband” via Melbourne Cricket Club, in which she said she and her girls were “devastated” by the sudden loss. Jane shares two daughters, Isabella and Phoebe, with the late cricket legend.

“My girls and I are devastated and saddened beyond belief to hear of Dean’s death in India,” Jane said. “My beautiful husband, the love of my life has lived his life with every bit of energy at his disposal, and he leaves an enormous gap in our lives which can never be filled.

“He leaves us with so many wonderful memories that will last forever. At this challenging time, when our grief is so raw, we have drawn much consolation from the many messages of goodwill and support from so many people around the world.

“Given Dean’s special love for the sub-continent, it was especially touching to hear so broadly from India, Pakistan, Sri Lanka and Afghanistan. We are overwhelmed by the scale of the response to the news of his death and we will forever be grateful for that.

She continued: “At this moment, we would sincerely ask the cricketing world to respect the privacy of our family. Details of Dean’s memorial celebration will be released in due course, so everyone has the chance to rightly commemorate his wonderful legacy and bid farewell.”