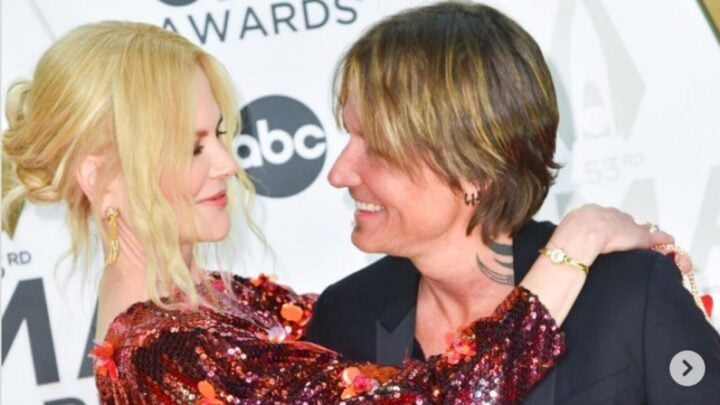 The couple have been married for 14 years. Source: Nicole Kidman/Instagram.

Never one to shy away from public displays of affection, proud wife Nicole Kidman shared a series of loved-up snaps of her and husband Keith Urban before he was due to take the big stage for the annual CMA awards, which celebrates country music.

The Big Little Lies star shared three special snaps to her Instagram page showing the couple in a loving embrace. In the photos they gazed into each other’s eyes while holding one another in a hug and even sharing a passionate kiss for the cameras.

“Almost time for Keith’s performance on this year’s @CMA’s. We couldn’t be more proud of your 3 nominations tonight baby xx,” Nicole wrote underneath the photos.

Almost time for Keith’s performance on this year’s @CMA’s ❤️ We couldn’t be more proud of your 3 nominations tonight baby xx Tune in at 7/6c on ABC! #BestMusicalEvent #BestMaleVocalist #EntertainerOfTheYear

The photos Nicole shared were actually taken from last year’s CMA awards ceremony where the actress wore a stunning red dress that was covered in reflective, eye-catching sequins with her hair pulled together in a messy low bun at the nape of her neck. Meanwhile, Keith wore a torn black t-shirt under a suit jacket for the big occasion.

Commenters showed their support for the couple with one writing: “Can’t wait to see him perform. (You guys are seriously adorable!)”. Another gushed over the pair commenting: “This fills my heart with so much love”.

The country star appeared on the 54th Annual Country Music Association (CMA) awards which aired live earlier today and was hosted by country stars Reba McEntire and Darius Rucker. Keith seemed to be attending the show solo after receiving three nominations for Best Musical Event, Best Male Vocalist and Entertainer of the Year. Unfortunately the Aussie-grown star didn’t take out any of the gongs on the evening but he did get to perform his new song ‘God Whispered Your Name’.

But the awards weren’t the only celebration for the country music star after he celebrated his 53rd birthday just a few weeks ago. Nicole once again marked the big day with a sweet Instagram post showing the couple floating in the air in what seemed to be a space walk experience.

Nicole smartly captioned the cute picture: “Happy Birthday my love! Love is in the air.”

Nicole and Keith have been married for 14 years after first meeting at the annual G’Day USA event in Los Angeles in 2005. They started dating six months later before tying the knot in 2006. They now share two daughters together, 11-year-old Sunday Rose and nine-year-old Faith Margaret.