Ivana Trump’s funeral: Scenes from the ‘wonderful send off’ in New York 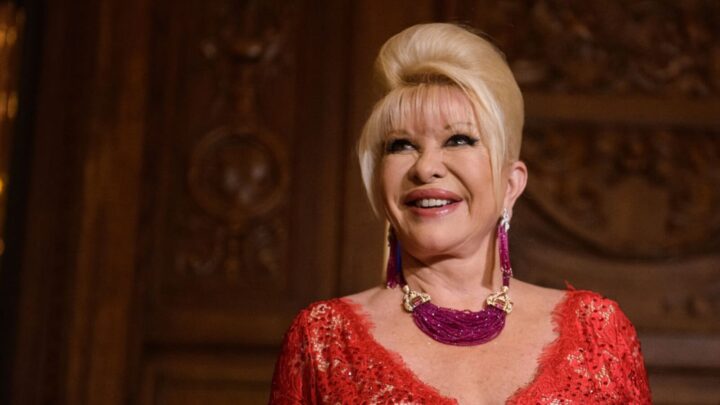 The whole Trump family were in attendance to Ivana's funeral in New York. Source: Getty

Ivana Trump, New York Socialite, businesswoman, and the ex-wife of former US President Donald Trump has been laid to rest in New York City on Wednesday, July 20 following a funeral mass at St Vincent Ferrer Roman Catholic Church on Manhattan’s Upper East Side.

The 73-year-old died last week after reportedly falling down the stairs of her Manhattan apartment. Authorities have ruled her death an accident, citing blunt impact injuries to her torso as the cause.

It was a rare public gathering for the Trump family, with Donald and Ivana’s three children, Ivanka, 40, Eric, 38, and Donald Trump Jr,44, arriving with their spouses and families just before their mother’s golden casket was taken into the church.

Donald and his current wife Melania arrived separately with their son Barron, 16, accompanied by security personnel.

Tiffany Trump, 28, the daughter of the former president whom he shared with Marla Maples, his second wife after divorcing Ivana, also attended the service.

While no cameras were allowed inside the church during the service, publicist R Couri Hay, who was also an attendee at the funeral, said: “It was an elegant and wonderful send-off for Ivana Trump.”

“The church was blanketed in red flowers, red roses – Ivana’s favourite flowers. It was majestic, it was sober.

“I would say that the church was drenched in tears.”

In a statement following her death, her family praised Ivana as a “force in business” and “a radiant beauty, and caring mother and friend”.

“Ivana Trump was a survivor. She fled from communism and embraced this country,” the statement said. “She taught her children about grit and toughness, compassion and determination.”

Her daughter, Ivanka, remembers her mother as “brilliant, charming, passionate and wickedly funny”.

“She modelled strength, tenacity and determination in her every action. She lived life to the fullest – never forgoing an opportunity to laugh and dance,” she wrote.

Ivana Trump was a successful businesswoman, a remarkable athlete, & most notably, a devoted & loving mother to @DonaldJTrumpJr, @IvankaTrump, & @EricTrump.

She was the embodiment of the American Dream. It was an honor to know her & to love her.

We will all miss her so much. ❤️ pic.twitter.com/PdYhkEnlVF

Born on February 20, 1949, in Czechoslovakia, Ivana quickly developed skills as a skier and joined the national ski team before working as a model for the 1976 Summer Olympics in Montreal.

She met Donald Trump that same year, with the couple marrying the following year on April 7 and soon became tabloid fixtures of New York society in the 1980s.

Ivana took part in a plethora of her ex-husband’s businesses, including the Trump Tower on Fifth Avenue in Manhattan, the renovation of the Grand Hyatt Hotel in New York City, and the construction of the Trump Taj Mahal Casino Resort in Atlantic City.

However, the glamorous blonde was recognisable in her own right, owning lines of clothing, beauty products and more to her name.

Prior to her death, Ivana released an autobiography in 2017, titled Raising Trump, that detailed her early life and raising her children with Donald Trump.