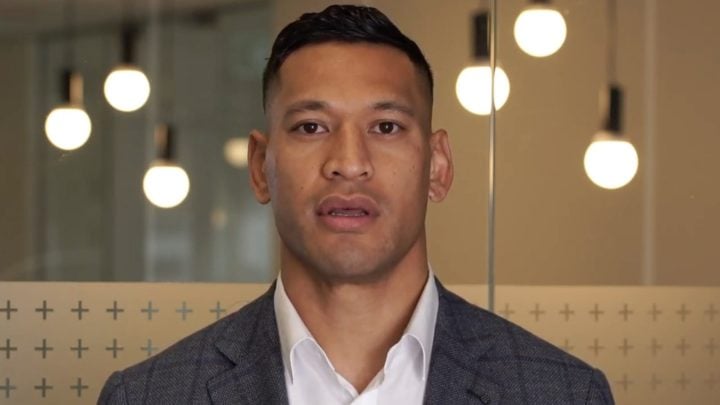 Israel Folau has launched legal action against Rugby Australia over his sacking from the NSW Waratahs earlier this year. Source: YouTube/ Israel Folau

Controversial sports star Israel Folau has officially launched legal action against Rugby Australia and the NSW Waratahs for unfair dismissal with his lawyers claiming his actions were “consistent with his freedom of religious expression”.

The 30-year-old, who was sacked for posting a series of comments on social media claiming homosexuals and other “sinners” would go to hell and has since been fighting against Rugby Australia to be accepted back into the team.

After a failed attempt to resolve the situation through the Fair Work Commission Folau, with the help of his lawyers will take Rugby Australia to court with a goal to seek compensation, interest, damages, injunctive relief and penalties which could total thousands of dollars, The Australian reports.

He will also reportedly call on Rugby Australia for a full apology for their actions and to be reinstated into the club. In an eight-page claim Folau’s lawyers argued that there was nothing unlawful about his conduct and he should not have been fired for his comments.

“This benign conduct, which the community accepts is a recognised fundamental human right and freedom, did not justify any punitive action being taken against him by his employer under the Player Contract or otherwise,” the claim read according to The Australian.

“It certainly did not justify Mr Folau losing his career and livelihood. Instead, the respondents did precisely that and terminated the Player Contract. As a result, Mr Folau is no longer able to play elite rugby in or for Australia again.”

Meanwhile, Folau has also spoken out about his decision via a video posted on YouTube in which he confirmed the legal action and thanked Australians for their support in his continued fight against Rugby Australia.

“As the media has reported our conciliation before the Fairwork Commission did not resolve the matters between us,” he said. “Accordingly, I am today commencing court proceedings against Rugby Australia and the NSW Waratahs.”

Folau continued: “I’ve been blessed to have received the support of tens of thousands of Australians throughout my journey and I want to say thank you to everyone who has offered their prayers and support. It has meant so much to Maria and me over the last few months and gives us strength for the road ahead.”

The announcement of the legal battle comes weeks after Folau revealed how his dispute with the organisation has been “extremely hard” on his wife Maria.

“Look it’s been extremely hard for her, she’s been dragged into this situation unexpectedly,” he told Alan Jones and Peta Credlin on Sky News.

“It’s been very frustrating for her but I’m very lucky she’s a strong woman, she’s [the] same as me, convicted by her faith. She’s continued to march on and stay strong.”

He also added at the time that he was looking for an apology from Rugby Australia.

“I’m hopeful for an apology from them and admission that they were wrong,” he said. “That would be something that I would like to get.”

Folau also claimed his social media post came from a place of love.

“I can certainly see it from both sides, you know, and like I said, if I had a child that was a drug addict, I would certainly still love my child without anything attache­d to that,” he said.

Have you been following this story? Do you agree with Rugby Australia’s decision to sack Israel Folau?