Insults and the F word: Molly Meldrum on Elton John and Princess Diana 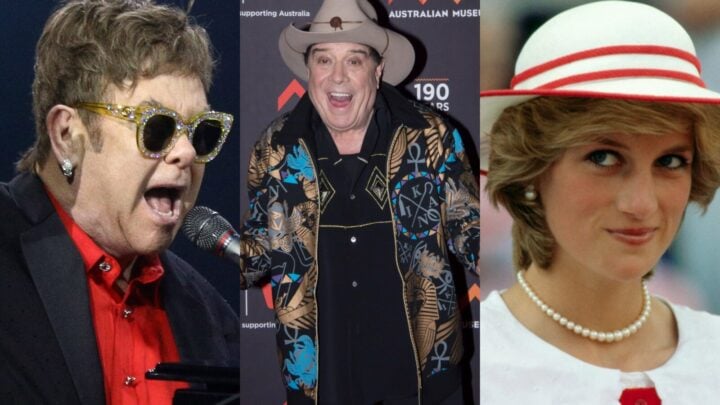 Aussie icon Ian ‘Molly’ Meldrum has rubbed shoulders with plenty of A-list stars and celebrities during his career. And on Sunday, the music critic and journalist, 77, sat down with the Herald Sun’s Confidential to recall two hilarious incidents involving Sir Elton John and the late Diana, Princess of Wales.

Speaking to the publication, Molly revealed the pair popped over to his place in Melbourne’s Richmond on separate occasions. The music critic first opened up about the time Elton and his mother Sheila visited his home.

“[Elton] looked around, then went outside to see the pool,” Molly told Confidential.

Molly said he was taken back when the ‘Rocket Man’ singer assumed the 10-metre pool was just a spa, saying: “I almost pushed him in the bloody pool.”

Meanwhile, the TV personality also shared a hilarious encounter involving the late Princess Diana. He revealed his personal assistant at the time, singer Lynne Randall, got the shock of her life after discovering the Princess of Wales in his home, saying: “You’ve got to be f**ing joking!”

According to Molly, Princess Diana found the exchange hilarious and whispered to the assistant at an event some days later: “How the f*** are you?”

It comes months after Molly opened up about the “huge relief” he felt after mending his long-time friendship with Elton, finally bringing their seven-year feud to an end. The pair, who have been friends for decades, suffered a sensational fall-out in 2012 after Meldrum aired controversial footage of Elton criticising fellow singer Madonna.

Sitting down for a chat with Molly, Elton was caught on camera calling the Like a Virgin singer a “fairground stripper” and a “nightmare” during an interview for Channel Seven’s Sunday Night program. Unsurprisingly the interview made headlines around the world however Elton claimed the comments were never meant to go to air, sparking a rift between the old friends that would last seven years.

But the pair finally managed to put the past behind them last year, after Elton paid tribute to Molly during one of his farewell shows at Melbourne’s Rod Laver Arena.

“We’ve had tears, we’ve had laughter but we’ve had friendship that’s lasted so long,” Elton told the crowd at the time. “And I want to pay tribute to him because I don’t think anyone from Australia has done more for music in Australia than Molly Meldrum.”

Elton John and Molly Meldrum have finally patched things up over the weekend, ending their seven-year feud. #TMS7 pic.twitter.com/vdMkGS3W7e

Meldrum said he was reduced to tears as a result of Elton’s comments, telling Channel Seven: “There were tears rolling down my cheeks. Such a long friend of mine and we’ve been through the ups and downs.”

Are you a fan of Molly Meldrum?