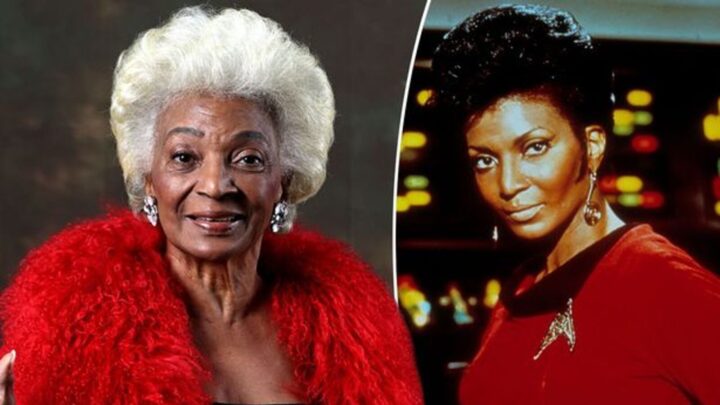 Tributes have poured in for the actress forever known as Lieutenant Uhura. Source: Twitter @ProfJoshuaA

The devasting announcement of the death of trailblazing Star Trek actress Nichelle Nichols has left the entertainment industry and Sci-Fi fandom in mourning.

Her son, Kyle Johnson, confirmed the news on Sunday on his mother’s public Facebook page, writing that his mother had passed of natural causes, seven years after suffering from a stroke.

“Her light, however, like the ancient galaxies now being seen for the first time, will remain for us and future generations to enjoy, learn from and draw inspiration,” he wrote.

Since news of her death broke, social media has been flooded with tributes to Nichols’ death from major icons from the Star Trek universe.

We lived long and prospered together. pic.twitter.com/MgLjOeZ98X

Y’all, @nichelleisuhuru.
Heartbroken at the news of her passing, however, I am comforted in the knowledge that she illuminated the way for so of us many with her grace, beauty, talent, intelligence and her commitment to humanity going boldly to the stars! #godess #queen
????????♥️???????????? pic.twitter.com/ye08mXzs3B

Not only was Nichols one of the few surviving members of the original Star Trek, but her presence on the show was one of the earliest examples of a Black woman portraying an intelligent character in a leadership position on a major TV show.

A remarkable woman in a remarkable role. Nichelle, you will be deeply missed. Sending much love and respect. pic.twitter.com/ZRnMblXx0Z

Her role as Lt Uhura pushed the boundaries for character diversity, even making TV history by sharing one of the first major interracial kisses with her c0-star William Shatner, aka Captain Kirk, a scene that Nichols would later say “changed television forever, and it also changed the way people looked at one another”.

Many actors become stars, but few stars can move a nation. Nichelle Nichols showed us the extraordinary power of Black women and paved the way for a better future for all women in media. Thank you, Nichelle. We will miss you. pic.twitter.com/KhUf4YM6pX

Her role on the show even won over Dr Martin Luther King Jr, who persuaded her to stay in the series after she briefly considered leaving the show for another role.

According to Nichols, King had told her: “Nichelle, whether you like it or not, you have become a symbol. If you leave, they can replace you with a blonde-haired white girl, and it will be like you were never there. What you’ve accomplished, for all of us, will only be real if you stay.”

“For the first time on television, we will be seen as we should be seen every day,” King had said.

“As intelligent, quality, beautiful, people who can sing dance, and can go to space, who are professors, lawyers.”

Nichols remained in the original series for a three-season run before becoming a NASA spokesperson, using her voice to advocate for more diversity in the space program.

We celebrate the life of Nichelle Nichols, Star Trek actor, trailblazer, and role model, who symbolized to so many what was possible. She partnered with us to recruit some of the first women and minority astronauts, and inspired generations to reach for the stars. pic.twitter.com/pmQaKDb5zw

I hope Nichelle Nichols is at peace and that she knew how much she meant to all us Black girls who grew up watching her.

A Black woman in the future, in space. Uhura.
Her name, a kiss in every mouth.

The original Star Trek series first made its way to the silver green on NBC on September 8, 1966, and featured a multicultural, multiracial cast, as a message from the show’s creator Gene Roddenberry who wanted viewers to see that far-off into the future, human diversity would be fully accepted.

Prior to making her mark in space, Nichols sang jazz alongside music legend Duke Ellington and acted in several smaller film roles.

Nichols was married and divorced twice, and is survived by her son, Kyle Johnson.

Were you a fan of the original TV series?