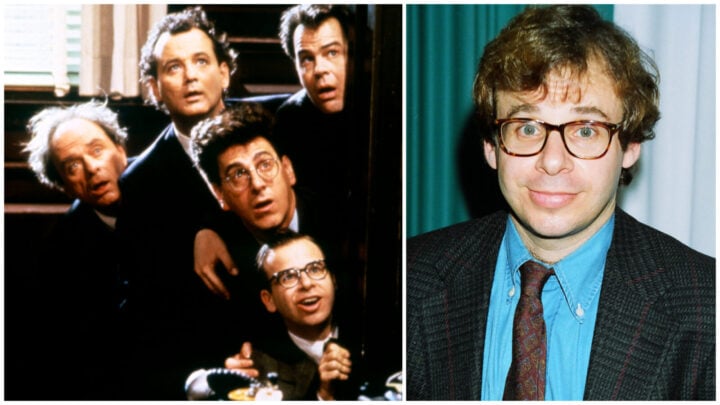 Moranis is said to be doing "fine" after the attack. Source: Getty.

Hollywood legend Rick Moranis, best known for roles in Ghostbusters and Honey, I Shrunk the Kids, was the victim of an unprovoked attack in New York City.

According to multiple reports, the 67-year-old was heading back to his apartment on the Upper West Side on Thursday morning when a random stranger wearing an ‘I love NY’ sweatshirt punched him in the head.

The New York Police Department confirmed the news on social media and appealed for the public’s help in tracking down the assailant. They said: “A 67-year-old male victim was walking southbound on Central Park West in the vicinity of West 70th Street, when an unidentified male struck him in the head with a closed fist, knocking him to the ground. Have info? Call/DM @NYPDTips.”

Despite being coward punched, the Little Shop of Horrors star is said to be doing well. He suffered pain in his head, back and right hip and went to a local hospital to be evaluated, police said, before reporting the incident to the 20th precinct.

🚨WANTED for ASSAULT: On 10/1, at 7:24 AM, a 67-year-old male victim was walking southbound on Central Park West in the vicinity of West 70th Street, when an unidentified male struck him in the head with a closed fist, knocking him to the ground. Have info? Call/DM @NYPDTips pic.twitter.com/ZvSUPjtVdp

“Rick Moranis was assaulted on the Upper West Side yesterday. He is fine but grateful for everyone’s thoughts and well wishes,” his agent said in a statement to the NY Post.

Many fans of Moranis reacted to the news, with one tweeting: “I hope they find the guy. Rick Moranis is such a class act. He basically retired when his wife passed away to raise their kids. To this day, I can’t walk by, or eat at, Tavern on the Green without thinking about him in Ghostbusters. Get well soon Bob McKenzie!”

Another said: “This is actually super sad. Rick Moranis came out of retirement literally the other week. Mans a widower. Took a break from acting (24 years) to raise his kids. If we never see this man again, I’d completely understand.”