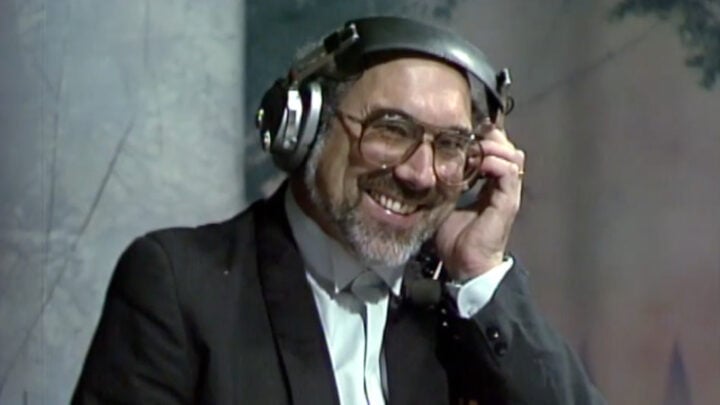 Fans of the long-running variety show were quick to share their condolences to the Hey Hey It's Saturday family while sharing their favourite memories of de Visser. Source: Facebook/ @heyheyitssaturday

Famed musical director of the popular variety show Hey Hey Its Saturday, Peter de Visser, has passed away at the age of 83.

Following news of his death, the host of Hey Hey It’s Saturday, Daryl Somers, delivered a moving tribute to de Visser on social media where he expressed his sadness over the passing of “a much loved member of the Hey Hey family”.

“I was very sad to hear of the recent passing of Peter de Visser,” he said.

“Pete was our Musical Director from 1985 – 1990, but more than that he had a quirky sense of humour that befitted the show.

“Quiet and unassuming, he was also caring, which belied his enormous talent as a musician, brilliant trombonist, arranger and composer.

“He always had the best musos at hand because live tele in those days demanded it. I used Pete as MD because we went back to when I started at GTV9 and was singing on the various variety shows in the early 1970s. He was musical co-ordinator, doing all the hard yards of arranging and organising copying on The Daryl Somers Show in 1982/83. He was an indispensable asset for my Musical Director at the time, the great Geoff Harvey.

“It was not easy to find vision of Pete’s time on Hey Hey but we’ve been able to pull some grabs together to glimpse part of his wonderful contribution to the music and fun of the show.

“Our sympathies to Peter’s family and friends who will be left with happy memories of his time with us.

“May he rest in peace. Daryl.”

Fans of the long-running variety show were quick to share their condolences to the Hey Hey It’s Saturday family while sharing their favourite memories of de Visser.

“So very sad, the days of real musos who worked full time doing what they love,and doing it brilliantly. My father was musical arranger for IMT for many years, and our house was full of talented musicians and singers dropping by to talk all things music. Don’t get them like that anymore. Rest in Peace Peter. Condolences to all who knew him well,” one fan wrote.

“Clearly a brilliant talent. Condolences to his family and band mates through the years.”

“Very sad RIP Peter thank you for being a major part of my childhood.”

“Sad to hear of Peter’s passing. I am starting to feel old having watched the clip and remembering how good Saturday nights were in the 80’s. Miss those times. Condolences to Peter’s family and all his lifelong friends in the Hey Hey family.”

“This is very sad news. I worked with Peter in the 90s and aside from being an excellent musician, he was just such a lovely person. Honoured to have known him. RIP Peter.”

The death of de Visser follows shortly after the passing of fellow Hey Hey It’s Saturday icon Ernie Carroll, the Australian television personality famous for creating Ossie Ostrich. He reportedly died of natural causes at the ag of 92 at his retirement home in Victoria on Wednesday, March 30.

“Ernie passed away peacefully early this morning in the presence of his family. He was 92 and died of natural causes in his unit at a Mornington retirement village. Ernie was a pioneer of television starting back in the 50s, coming from a radio background to GTV9 when television was in its infancy.

“Of course he was best known for his creation of Oswald Q Ostrich (Ossie), my lovable and nonsensically funny ‘sidekick’ on Hey Hey It’s Saturday for 25 of its 30 year run. A tribute was paid to Ernie on our recent 50th anniversary special.

“I loved him very much and along with my wife Julie send our deepest sympathies to his daughter Lynne, son Bruce, his grandchildren and his partner of almost 50 years, Miffy Marsh. The family have requested privacy at this time.

“Rest in peace Ern. Forever in my heart, Daryl.”