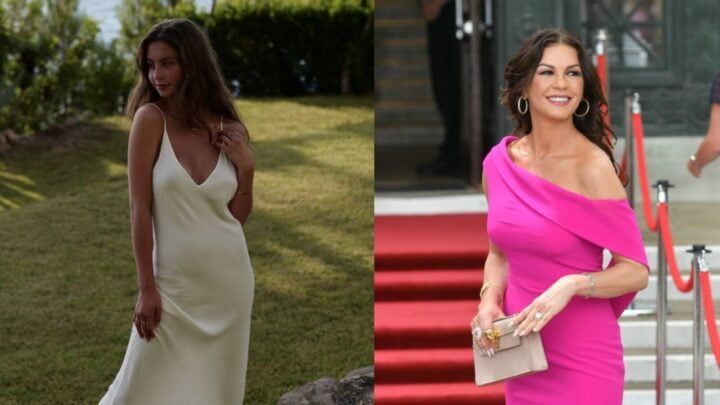 Like mother, like daughter! The 17-year-old has proved how strong Catherine's genes really are. Source: Catherine Zeta-Jones/Instagram and Getty.

Catherine Zeta-Jones has long been known as one of the world’s most beautiful actresses, and now her teenage daughter Carys seems to be following down the same path. The Chicago actress, 50, surprised fans this weekend as she took to Instagram to share a stunning snap of her bombshell daughter Carys Douglas taken at their family home.

The photo showed 17-year-old Carys standing among nature dressed in a gorgeous scoop-neck, cream silk maxi dress with many of her mother’s close friends and fans saying they mistook the youngster for her movie star mother for a moment.

My girl, in the garden.

The loving caption read: “My girl, in the garden” and sent commenters wild as they gushed over the stunning photo. One wrote: “I thought it was you. Beautiful” while another linked her back to her famous father saying: “I can see Michael in her but your hair”, meanwhile another wrote: “Gorgeous like her momma”.

The youngster also showed some love and appreciation for her megastar mum back in May when she posted an adorable throwback photo of the pair together on the set of a movie. In the snap, baby Carys has her arms wrapped around her mum’s legs as her dad, Michael, sits behind them chatting away.

Happy Mother’s Day to this super woman. I am so lucky to be your daughter. I love you mummy🕊🤍

The sweet caption read: “Happy Mother’s Day to this super woman. I am so lucky to be your daughter. I love you mummy”.

Catherine and her fellow Hollywood actor husband Michael Douglas, 75, have two children together including Carys and their 19-year-old son Dylan. Michael also has his eldest son Cameron from his first marriage to Diandra Luker which ended back in 2000.

The blended family have notoriously gotten along well with Catherine sharing a sweet throw back of all three children to celebrate Michael on Father’s Day last month. The caption read: “We love you Michael, Happy Father’s Day my love” and showed the group of five happily embracing each other.

We love you Michael, Happy Father's Day my love 💌🌹♥

In November this year, the star-studded couple will celebrate their 20th anniversary with Catherine joking that “they said it would never last” when she appeared on Good Morning Britain earlier this month.

“I have a great blueprint of marriage both with my own parents and Michael’s father and stepmother and what a good marriage means and how precious that is and how you work at it and sustain it and appreciate it. So yeah, 20 years.”

Do you think they look alike? Do you like this famous family?