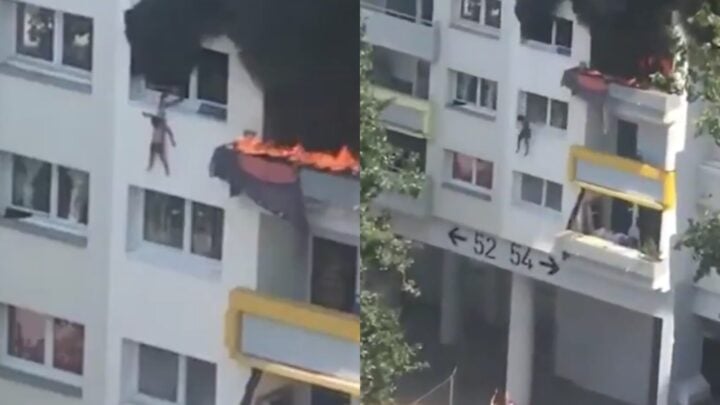 The terrifying moment two young brothers, aged 10 and three, jumped from a 10-metre-high window of a burning apartment building in Grenoble, France has been captured on video.

Dramatic footage of the incident has since emerged online, showing the 10-year-old boy lowering his three-year-old brother out of a window before letting him go. Thankfully, the toddler was caught by bystanders waiting below. The older brother can then be seen climbing over the window ledge before jumping to safety himself.

The pair were unharmed from the fall but might have suffered from smoke inhalation, French media reports claimed. The boys were hospitalised along with 17 other residents of the building.

According to CNN, bystander Athoumani Walid, 25, told French news channel BFM TV he heard screams and went out to investigate.

“The eldest one took a lot of courage and a lot of confidence,” Walid said. “He put his little brother first. We took him in and we said to the other one, ‘Come on, jump, it’s your turn, jump’. Then he climbed up through the window, he let go, and then we got him again. None of them fell on the floor. No one’s hurt.”

He added: “We saved their lives but they made the right decision to go for it. We had no choice, we had no way to go to them. They were the ones who came to us. They were the brave ones, they were the heroes.”

Grenoble Mayor Eric Piolle reportedly also said: “I would like to congratulate the inhabitants of Villeneuve who made a heroic rescue of two children trapped in their burning apartment today. Hand in hand, they allowed the two little ones to get out unharmed from this drama.”

The video, which has been shared widely on Twitter, has received a slew of comments from social media users. One Twitter user @sharrocksm wrote: “Heroic act of kindness. There is good in the world.”

While @ChefMama32 posted: “This is truly a heroic act. Not only those who caught these little dudes but how brave they were and trusted those below to catch them.” And @MARGOTinJapan wrote: “Thank god they survived! Must be so scary for those people on the ground as well.”