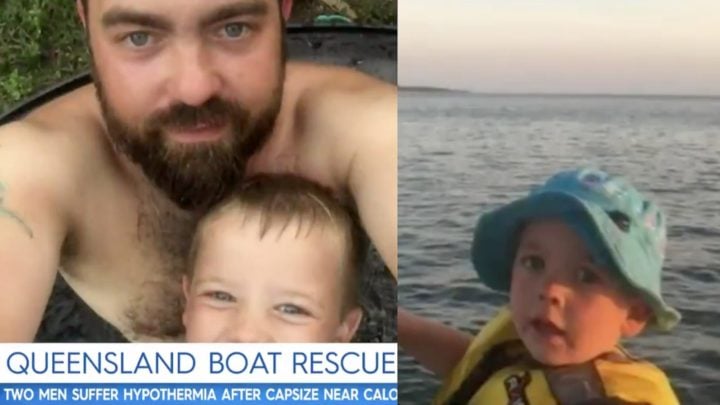 Julian Honan and his dad Mikey were rescue from the sea. Source: Twitter/Today Show.

A seven-year-old boy has been rushed to hospital in a critical condition while two men are treated in hospital for hypothermia after their boat capsized, leaving them treading water for several hours.

Police were notified of a distress call from the 5.2 metre boat at around 1.30am on Sunday, as it took on water around nine miles off the coast of Caloundra.

Water police launched an urgent search with the Coast Guard to try and find the vessel, after being told there were two men aged 48 and 39 and a seven-year-old boy onboard.

They were eventually spotted in the water by an anchored off-shore tanker which notified police – with the trio rescued just before 8am.

A seven-year-old boy is fighting for life and two men are suffering hypothermia after their fishing boat capsized in icy waters off the Sunshine Coast. #9Today pic.twitter.com/3It1HnUApt

“The 7-year-old boy was winched into a Rescue 500 helicopter and airlifted to Sunshine Coast University Hospital,” Queensland Police said in a statement. “The two men were rescued by water police and transported back to shore.”

The boy, named by 9 News as Julien Honan, was reportedly winched into a helicopter and taken to Sunshine Coast University Hospital in a critical condition, news.com.au reports.

“It is very lucky that all three were found alive this morning,” Queensland Ambulance Service senior operations supervisor Kristy MacAlister said, according to the news outlet.

He has reportedly now been placed in a medically-induced coma.

Julien’s father, named as Mikey, and a friend Steven Jaycock were taken to land by marine rescue and are being treated in hospital.

According to 7 News, the trio weren’t wearing life jackets as they were likely sleeping when their boat began to take on water.

They are believed to have clung to debris until they were found, with both men taking turns to desperately try and keep Julien above water.