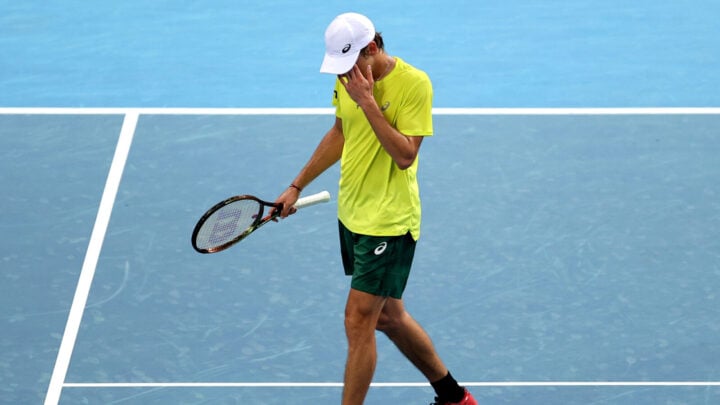 Alex de Minaur is one of several high-profile figures linked to the fake Covid-19 vaccine passport situation after being named as an alleged customer of the scheme. Source: Getty Images.

Australian tennis star Alex de Minaur has denied claims he is under investigation by police for allegedly purchasing a fake Covid-19 vaccination passport.

The 23 year old’s denial follows an announcement from Spanish police that they had recently dismantled a criminal network operating out of a Madrid hospital that sells fake vaccination passports.

de Minaur is one of several high-profile figures linked to the situation after being named as an alleged customer of the scheme. In a statement to social media, de Minaur denied the claims, insisting he is only linked “simply because I was a patient.”

“I wanted to write a quick message here to avoid any misunderstanding regarding a report that is in the Spanish media about my vaccination certificate,” he wrote.

“I received my first dose of the vaccine in London last summer, and the second one at the Hospital La Paz in Madrid.

“News came out today that the hospital is under investigation for providing falsified Covid certificates to some of its patients.

“I want to make it 100% clear that I received my second shot, that I have a completely valid, accurate and true vaccination record.

“I am not ‘under investigation in any way as is being suggested and my name is connected to this story simply because I was a patient at the hospital (as many thousands of others were).”

A total of 11 people have been arrested and accused of “forgery and the use of forged documents”, according to AFP.

The Spanish news organisation, Telemadrid was the first to reveal de Minaur, who lives in Spain when not competing in Australia, was part of the list.

“The Australian tennis player Alex de Miñaur, of a Spanish mother and a Uruguayan father, is one of the last investigated as an alleged client of the false Covid passport plot, as Telemadrid has learned,” the news organisation said.

de Minaur isn’t the only high profile tennis player to be embroiled in a Covid-19 vaccination controversy, earlier this year tennis star Novak Djokovic made headlines after his visa was cancelled following controversy surrounding his medical exemption to compete in the Australian Open despite being unvaccinated.

Djokovic left Australia after a last ditch effort to have his visa cancellation overturned failed in Federal Court.

Djokovic was seen at Melbourne’s Tullamarine airport at 10:30pm on Sunday, January 16 flanked by Australian Federal Police (AFP) officers as he boarded an Emirates flight to Dubai.

Novak Djokovic leaves the Marhaba lounge at Melbourne Airport for flight back to Europe. pic.twitter.com/Rg2D1XTTwW

In a statement at the time, Djokovic said he was “extremely disappointed” with the court’s decision but would respect the ruling and co-operate with authorities.

“I am extremely disappointed with the ruling to dismiss my application for judicial review of the decision to cancel my visa, which means I cannot stay in Australia and participate in the Australian Open. I respect the Court’s ruling and I’ll co-operate with the relevant authorities in relation to my departure from Australia,” he said.

“I am uncomfortable that the focus of the past weeks has been on me and I hope that we can all now focus on the game and tournament I love. I would like to wish the players, tournament officials, staff, volunteers and fans all the best for the tournament.

“Finally, I would like to thank my family, friends, team, supporters, fans and my fellow Serbians for your continued support. You have all been a great source of strength to me.”