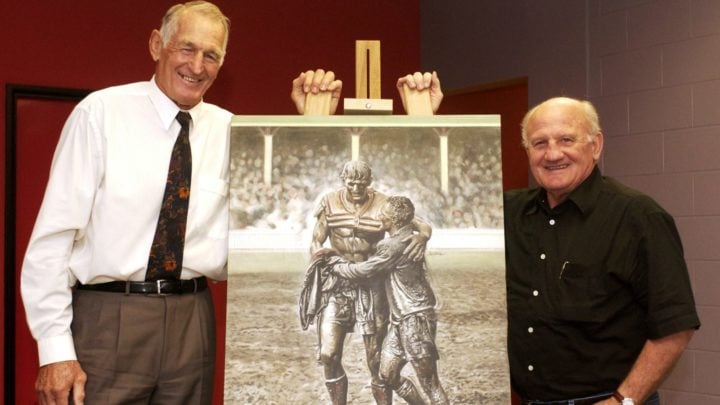 The former Australia captain and coach passed away on Saturday night. Source: Getty.

Former Australia captain and coach Arthur Summons has died at the age of 84 after a battle with cancer. Summons, who underwent major surgery in 2018 to remove cancer from his mouth, passed away on Saturday night.

Summons is famously remembered for being in the iconic photograph alongside rival Norm Provan after the 1963 Grand Final. Australian Rugby League Commission chairman Peter V’landys paid tribute to Summons on Sunday.

“Arthur epitomised everything that rugby league stands for — he was a talented player, a fierce competitor, a wonderful character and extremely popular with everyone,” V’landys said, according to The Sydney Morning Herald.

“His importance to the game continued — and was immortalised — after his retirement as a player when he became the face of our Premiership, along with Norm Provan, and he embraced the responsibility which came with that. Arthur’s memory and legacy will live on in bronze for all of us to celebrate.

“This is a sad day for Rugby League, but it’s also an opportunity for us to celebrate what makes Arthur Summons such a wonderful part of our history. Arthur was famously relatively small in stature, but he was still an absolute giant of our game. He will be greatly missed.”

Many rugby league fans took to social media to share their condolences, with one writing: “RIP Arthur Summons a true rugby league legend.” Another added: “RIP to one of the greats. They really don’t make them like this anymore.”