Are table manners are dead? ‘Kids these days eat like animals’ 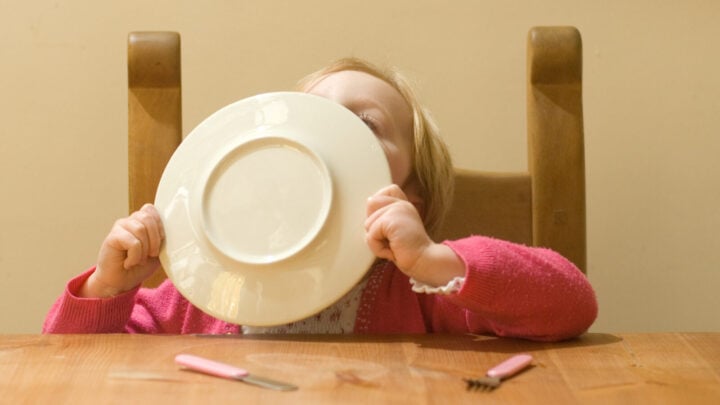 According to one teacher, kids these days are eating like animals. Source: Getty

Table manners are on the decline, if not dead already according to one woman, who’s taken to the internet to share her “shock” over the lack of eating etiquette for children.

The woman, who took to the Mumsnet forum to air her complaints, revealed that as a primary school teacher she’s seen a decline in children’s table manners, and is “shocked” at how many kids are “eating like animals”

“I work in a primary school and am shocked by the lack of table manners,” she wrote. “Thinking that year 3 or 4 (aged eight or nine) is a suitable age to be able to use cutlery properly, I’d say about two children in each class do this.

“I’m talking eating sweetcorn (and pretty much everything) with fingers, putting a chicken breast on a fork and eating it like a lolly, eating a jacket potato by scraping the insides off on bottom teeth.”

The woman continued by saying it’s not only at school but also in restaurants with the parents present, asking how parents can be oblivious to their children “eating like animals”.

“Similarly in a restaurant, you’ll see parents with decent table manners and then kids eating like animals — how can parents not notice this?” she asks. “I’m your average … parent, nothing posh here, but [I] was bought up with standards! So AIBU (am I being unreasonable) [is it] the way things are going? [or are] manners [the only thing that] separates us from animals?”

The post has been flooded with over 100 messages, with many saying the woman was being unreasonable, saying that older generations always complain about “kids these days”

“I remember my dad saying something very similar when I was a child (kids these days!) 40 years ago. I imagine it’s one of those things everyone says about the next generation. So politely (I was brought up well)… YABU (you are being unreasonable)”, one person commented

“I love it when people describe how well-behaved they themselves were as a child as if it’s objective fact,” another wrote. “I bet if you asked any of the children OP (original poster) describes if they eat nicely, if their parents are strict and if they have lots of rules they have to follow the vast majority would say yes.

Others, however, agreed with the woman and said they’re fighting a constant battle as parents to reinforce the importance of table manners, with one even describing her son as a “savage”.

“I’m finding it a constant struggle to maintain the manners they have had drummed into them from when they were two,” one said. “I’ve got to be careful because I don’t want to make meal times into a war zone, but it’s something I’ve noticed as well, and it winds me up no end.”

While another said, “I think it’s really hard. DD (dear daughter) knows manners but her default position is to use her fingers. She just wants to eat the peas and can’t be bothered to chase them around the plate with her knife and fork, it’s quicker and easier to just use fingers. If we are out I ensure she uses a knife and fork, at home, I battle it less, as we have enough meal time battles to get her to eat something without adding how she eats into the mix!”

“He eats like a f****** savage,” another wrote. “I have no idea why. He’d definitely try and eat sweetcorn with his fingers or a chicken breast stuck wholesale onto a fork. He gets it all over his face and fingers too. I mean he gets corrected at EVERY SINGLE MEAL, so what else there is to do I don’t know.”

Do you think table manners are dead?