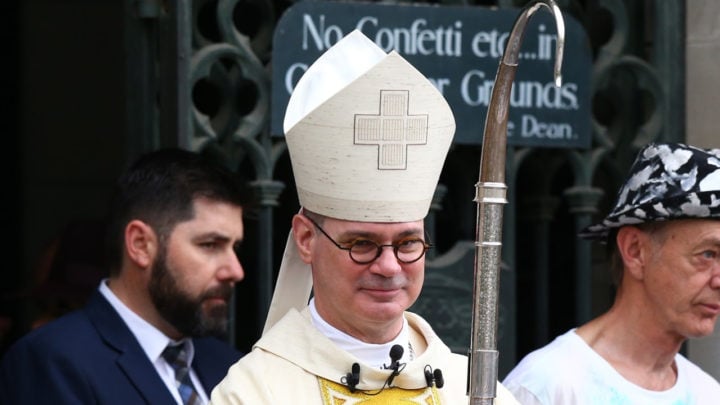 Victoria’s highest-ranking Catholic has controversially claimed he would rather go to jail than break the seal of confession by dobbing in a priest who confessed to child sex abuse.

Archbishop Peter Comensoli originally told the ABC he would not go against his principles and would be prepared to spend time behind bars for not reporting comments made in confession about the abuse of a child. However, he did claim he would encourage the priest to fess up to authorities about the crime.

The comments were made following the introduction of new legislation in Victoria which removes the exemption for religious leaders to mandatory reporting laws about physical or sexual child abuse. Speaking about Comensoli’s response on Sunrise on Thursday morning, politician Kerryn Phelps didn’t agree with the priest and claimed it’s time for the Catholic church to change its ways and better protect the innocent.

Victoria's highest-ranking Catholic has made a stunning admission, saying he'd rather go to jail than dob in a priest who confessed to child sex abuse. pic.twitter.com/GMoisIGjhx

“I think it’s time for the Catholic church to evolve,” she explained on the Channel 7 program. “If there is a choice between the church hierarchy and its laws and the rights of children, then I think the rights of children must prevail.” Phelps added: “We have heard so much now about the church becoming a haven for pedophiles and even within its own institutions that it’s time the Catholic church decided to change its ways and protect children first.”

Her opinion was echoed by news publication Whimn editor Felicity Harley, who expressed her concern that many priests are going without punishment for their crimes.

“I think it’s horrifying to think how many people over history have confessed in a confessional booth and priests have not been able to say anything,” she exclaimed on Sunrise. “I’m sorry you can’t just encourage someone to confess in the booth, you have to come out and talk about it and if he wants to go to jail, so be it, but it scares me that someone of this level, this leadership is saying this.”

Meanwhile, later on in the program, Sunrise hosts Samantha Armytage and Natalie Barr weighed in on the debate, claiming even as Catholics they understand action needs to be taken.

“Well it’s time for the Catholic church to reform massively and I say that as both of us being Catholic,” Samantha commented. To which Natalie chimed in: “You understand it if you’re Catholic but maybe the times up, we’re talking about raping kids here.”

“There has to be so much reform in the Catholic church it’s not even funny,” Samantha added.

They weren’t the only ones with an opinion to share, with many other Aussies taking to social media to express their thoughts on the situation and how they think it will impact children across the country.

“The Catholic church is digging itself deeper and deeper into disrepute,” one person wrote on Twitter. “Obey the law. It is the will of the people. This abomination must be stopped. Do your part or you are demonstrating complicity.”

Another added: “I respect religious beliefs but dear god. Our children must be protected. This is a hideous. crime. Put the life of a child first. No more excuses, no more cover ups. Our children deserve your protection.”

While a third exclaimed: “Good, a stint in jail will be a good reality check. Absolute ignorance that the seal of confession is above the law.”

What do you think of the archbishop's comments? Do you think priests should be made to report crimes confessed in the church? Or do you believe they have a right to keep it secret?