‘A light that shone so bright’: Paul Green’s brother reflects on the rugby icon’s life 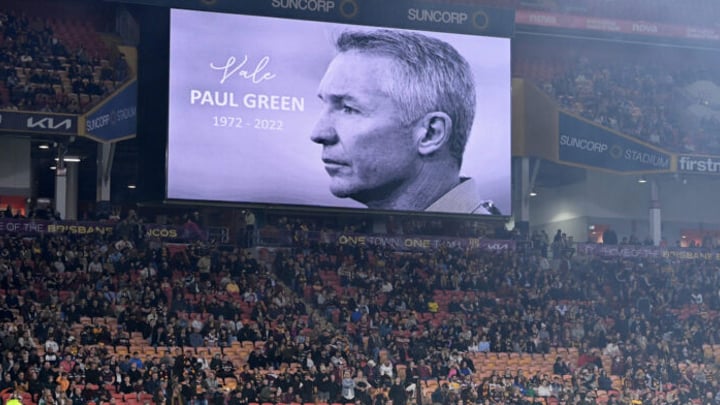 Among the mourners were Green's siblings, Rick Green, Lisa Miller, and Peta Nash, who fought through to tears to pay tribute to their late brother. Source: Getty Images.

An emotional Rick Green has spoken of the “courage” and “greatness” of his sporting icon brother Paul Green as friends, family, and fellow sporting greats gathered on August 30 to farewell the late rugby league star and premiership-winning coach.

The likes of Allan Langer, Wally Lewis, Steve Renouf, Wendell Sailor, and Kevin Walters joined mourners at BMD Kougari Oval at Wynnum Manly Leagues Club to share treasured memories of Green and reflect on his contributions to the game.

Among the mourners were Green’s siblings, Rick Green, Lisa Miller, and Peta Nash, who fought through tears to pay tribute to their late brother.

“He opened his arms to the world for all to see, no matter what walk of life from which you came,” Rick said.

“He had the courage and enlightenment to pay the price of being a genuine human being.

“He knew that doubt and darkness were the cost of knowing, but boy did he value knowing. He left no stone unturned in finding that out.

“They all speak of a light that shone so bright. That greatness is seen in so many ways.”

It’s estimated that 700 guests were in attendance for the ceremony which saw Green’s former teammates Andrew Gee, Craig Greenhall and Danny Grimley, along with brother Rick, and friends Mark Beitz and Jamie Fitzpatrick act as pallbearers for the service.

Green’s wife, Amanda, led the tributes for her late husband alongside her children where she recalled a touching story of how she and Paul first met.

“Paul and I met met at the Mad Cow in Townsville, an establishment of many relationships,” Amanda recalled.

“The day Paul proposed he said to me you better strapped youself because it’s going to be one hell of a ride, and that it was.

“We had the deepest love and he made me feel deeply loved, we’ve always been a team.

“As heartbroken as I am today, I’ve loved every moment with Paul. I loved you yesterday, I love you today and I will love you tomorrow.”

While paying tribute to Green, those in attendance no doubt celebrated his stellar playing career that included taking to the field an incredible 162 times with a number of clubs which included the Cronulla-Sutherland Sharks, North Queensland Cowboys, Sydney Roosters, Parramatta Eels, and the Brisbane Broncos.

After stepping off the field, Green turned his attention toward coaching where he famously led the North Queensland Cowboys to their first Grand Final in a decade. The Cowboys went to win the final with a 17-16 win over the Brisbane Broncos. The monumental win made Green the first coach in history to defeat the Brisbane Broncos in a Grand Final.