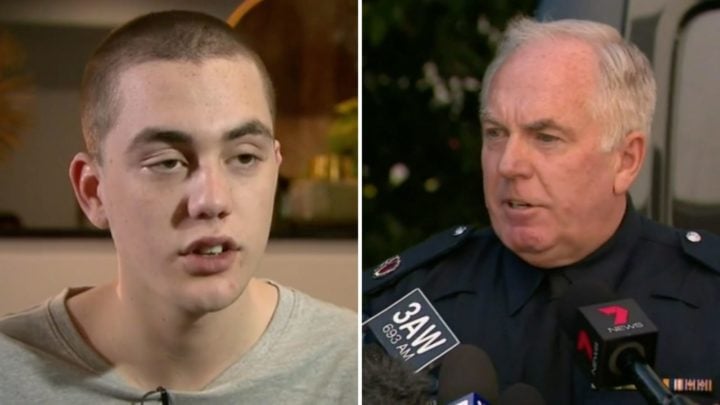 Isaiah Stephens (left) - one of the brothers accused of attacking Transit and Public Safety Command Assistant Commissioner Chris O’Neill - broke his silence in an interview with 9 News. Source: 9 News Melbourne

It was the attack on one of Victoria’s most senior police officers that left Australians sick to their stomachs and a month after Chris O’Neill was targeted by two teens in Melbourne, one of his alleged attacks has broken his silence – claiming he’s now a victim.

Appearing on Monday’s edition of 9 News Melbourne, Isaiah Stephens gave his version of events. Transit and Public Safety Command Assistant Commissioner O’Neill was allegedly targeted by Stephens and his brother last month close to the Toorak train station in the inner suburb of Melbourne. The attack left him with significant bruising, bleeding on the brain and potential damage to the kidneys.

Reports at the time claimed O’Neill wasn’t on duty at the time of the attack and was attending a private function when he was set upon by the young brothers. The two men boarded a train at Southern Cross and tormented passengers by vomiting and urinating throughout the carriage.

Witness accounts claimed the alleged offenders may have been under the influence of drugs or alcohol at the time of the attack.

They were kicked off by authorised rail officers at Heyington station before they allegedly attacked O’Neill. He was near the vicinity of St Kevin’s College at the time and the men are suspected of kicking and punching him in the chest before fleeing the scene.

Victorian Police later confirmed they charged an 18-year-old man and 20-year-old man from Malvern East in relation to the serious assault.

Speaking to 9 News Melbourne reporter Sam Cucchiara, Stephens now says he’s a victim and that he’s received intense public backlash and death threats since he and his brother were arrested.

“A lot of people want to hurt me. It’s quite violent and aggressive,” he said. “Honestly, I’m just trying to move on from what happened.”

Stephens said he doesn’t have a lot to say to the people who have sent him messages but claimed that they should be “held accountable for what they’re doing”.

He was released on bail and “found it a bit of a joke” how much media attention he and his brother received after the incident. His brother remains behind bars, while 9 News Melbourne reports their father was also locked up after allegedly calling O’Neill a “maggot dog” and vowing to start gang land killings again. He has since been released on bail.

When Cucchiara informed Stephans that assaulting an Assistant Commissioner is serious, the 18-year-old didn’t agree, claiming the book wouldn’t have been thrown at him as hard if he’d attacked a regular person. He also implied that he wasn’t a danger to society.

“I can’t sit here and say that I’m continuously looking for people to hurt,” he said, also denying that he urinated and vomited in the train carriage before the attack.

He also refused to comment if his brother did any of those things.

The report also confirmed that O’Neill hasn’t yet returned to work yet and is continuing to recover at home. Meanwhile, the brothers haven’t formally entered a plea for their charges, but are expected to face court again in September.

Have you been following this story? Do you think enough is being done to keep police and the public safe on the streets?