Pets and retirement villages: What you need to know before making the move 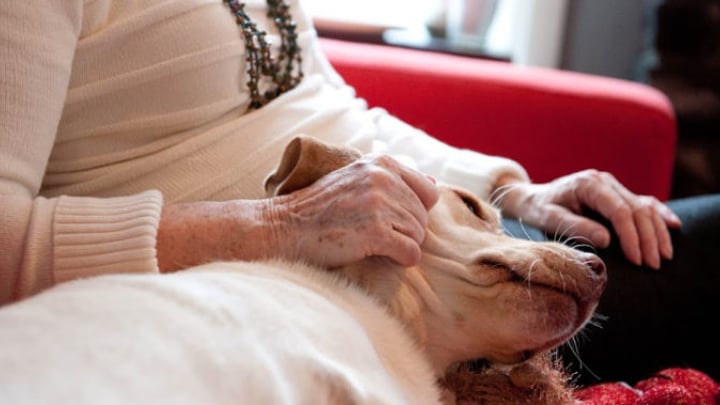 Aussies must be wary of the guidelines when moving into a retirement village with a pet. Source: Getty

Moving into a retirement village is a big change in a person’s life with a new neighbourhood, home and routine to adjust to. While friends and family members can offer support during the transition, sometimes all a person wants is a loving pet by their side to provide constant companionship.

Whether it’s a pet they’ve owned for years or they are looking to add a new furry friend into the mix – dogs, cats and even birds can provide that extra bit of comfort in difficult situations.

However, people must be aware of the guidelines retirement villages have in place regarding pets, as some have strict policies against keeping animals in the facility.

Thankfully, according to CRH Law partner Brian Herd, newly established retirement villages generally allow residents to keep pets although it will normally require the approval of the RV operator. On the flip side older villages are not so lenient, unless it’s a seeing or hearing dog, because not allowing those may in fact be discriminatory.

“While pets are very therapeutic for residents they can also be a problem in the close gated community of an RV (retirement village),” the lawyer explained.

“For villages that allow pets, they usually have what are called ‘pet guidelines’. They are often devised in consultation with the residents and generally comprise three major elements – what sort of pets you can keep, rules about their control and when a village can ‘evict’ a pet.”

In most cases permitted pets tend to be limited to the familiar species, such as dogs, cats, fish and birds, although some villages restrict the size of dogs, particularly in high rise RV’s. Surprisingly in America, some RV’s have even allowed monkeys and boa constrictors to reside with their owners – something that Australian RV’s would certainly not consider.

However, there has been a rise across Australia in the number of aged care facilities implementing pet programmes, which see animals visiting residents regularly as pet companions. Some of these have included horses, ducks, guinea pigs and rabbits.

Along with their happy natures and blind love, pets can actually provide major benefits for people, both mentally and physically.

According to research undertaken by Healthy Pets, simply walking a dog could help lower body mass index resulting in a reduced risk of heart disease and stroke. They can also help people overcome loneliness, stay focused and provide routine to the day, something that many over-60s miss following retirement.

A separate study by the Alzheimer’s Association in Germany found pets can even help improve verbal communication function and attentiveness among those suffering from Alzheimer’s and dementia.

Many Starts at 60 members have experienced the positive effects of pet ownership, with most claiming their lives are a lot fuller since welcoming a fury friend to the family.

“I have always had dogs and can’t imagine life without one. They give unconditional love and have supported me through some tough times by just being with me,” Cheryl Donnellan said.

While Valerie Bush added: “We have always had pets, mainly for the children in the early days as it taught them to be careful, caring and kindness. Later in life it is all about the company and companionship”.

Although pets clearly provide many benefits, Herd said RV residents must make sure it doesn’t disrupt the rest of the community. The lawyer explained there are occasionally issues surrounding peace and quiet causing problems for both the resident and the facility.

“A neighbour objected and the dispute ended up in a Tribunal that determined the bird had to leave the village and the operator was fined for not ensuring the peace and quiet of the village.”

Being separated from a beloved pet can be extremely distressing for some so in order to avoid any heartbreak Herd suggested double checking the guidelines before moving into a RV.

“Clearly, before signing up, a person should check with the village about its pet policies and get the approval of the operator to bring their pet with them,” he said.

“If the pet won’t be allowed, the person then has to consider what is most important to them – the pet or the village.”

Do you have a pet? Have you considered your options when the time comes to move into a retirement village?