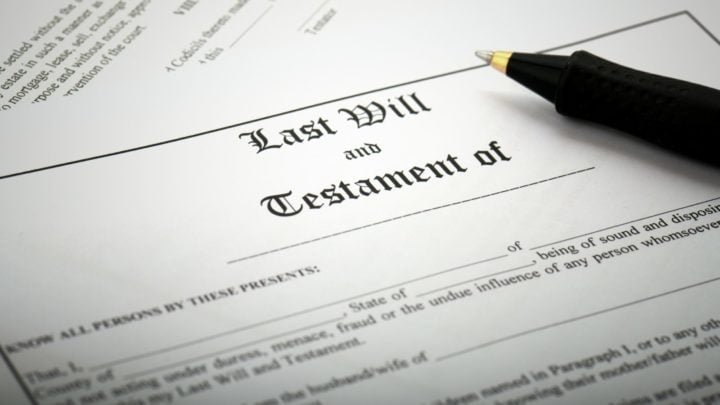 Australian artist John Olsen is suing his step-daughter Karen Mentink for allegedly influencing her mother's decision to change her will before her death. Source: Getty

Australian artist John Olsen is suing his step-daughter Karen Mentink over claims she allegedly pressured her ailing mother to change her will before her death in order to secure a substantial inheritance for herself.

The case was heard in NSW Supreme Court on Monday with the 91-year-old Archibald Prize winner alleging that Mentink obtained a massive sum of $3.3M from his estate by reason of ‘undue influence’ over her late mother Katharine while she was terminally ill, The Australian reports.

It was claimed in court that Olsen’s fourth wife Katharine was “cognitively impaired” when she handed over control of her part of the sizeable estate to her daughter and was suffering from personality changes as the result of two brain tumours.

According to The Australian the court heard Mentink allegedly convinced her mother to create a new will in October of 2016, shortly after the family learned that Katharine’s condition was terminal. It was claimed Mentink influenced her mother’s decision to increase her inheritance from $2M to around $5.3M.

Read more: Bob Hawke’s daughter ‘to challenge will, after he left everything to Blanche’

Meanwhile, it was also heard in court that Katharine transferred her daughter $2.17m from a joint bank account she had with Olsen following the change in will, as well as a further $30,000, The Australian reports.

During the court case on Monday it was reportedly claimed that Katharine’s signature on the money transfer was “shaky” and did “not appear” to be in her writing, while the court also heard that Mentink had become somewhat of a carer to her mother before her death, allegedly giving her more power to influence Katharine’s decision about her will.

She had, according to The Australian, even moved into the family home to care for her mum in the weeks before her death in December 2016.

Meanwhile, Olsen, who was married to Katharine for 27 years, said his wife’s behaviour changed significantly during that period, describing her as “very irrational”.

“She sort of became very anxious, quite abusive to a number of people,” he said in court according to The Australian.

“My wife did not ask me or tell me that any money was being given to Karen Mentink. I would never give such vast amounts of money like that to anyone.”

Read more: Risky business: Creating a DIY will could leave you thousands out of pocket

During the court hearing on Monday Mentink’s lawyer Raoul Wilson SC asked Olsen if Katherine had been of a “sound mind” in the months leading up to her death to which he reportedly replied: “In hindsight no”.

Starts at 60 reached out to representatives of both parties prior to publication.

Have you ever been involved in a tricky case involving a will? Have you been following this story?