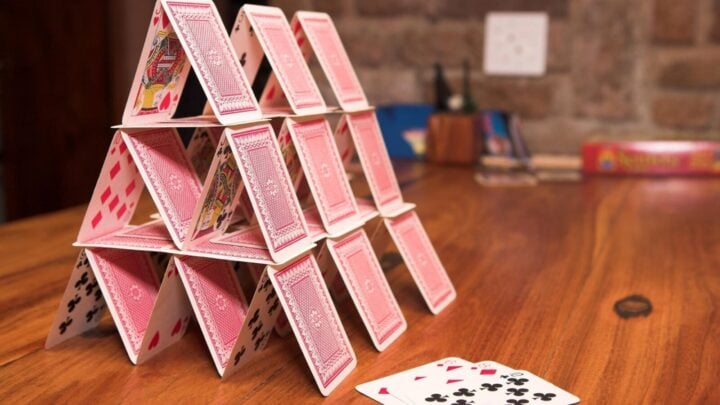 It's easy for investments to feel like a house of cards in a volatile market. Source: Getty.

After Tuesday’s announcement that the RBA cash rate would remain at the historic low of 0.25 per cent for the sixth month in a row, investors have once again been forced to hold steady for the foreseeable future. And in light of the current economic downfall, new data has revealed that almost a quarter of pre-retirees in the 55 to 64 age range have decided to delay retirement due to Covid-19.

The news came from the 2020 Australian Investor Study released by the Australian Stock Exchange (ASX) that looked into national investment behaviour. Through exploring how the different demographics reacted to the sudden change in the market, the report found that younger investors were the most likely to have made significant shifts to their portfolios while older investors were more inclined to stick with their existing strategies.

With many retirees relying on dividends to fuel their regular income stream, it’s no surprise the Covid-induced hit to the sharemarket hurt this demographic more than others. Bank dividends were initially suspended at the beginning of the pandemic before the Australian Prudential Regulation Authority (Apra) made the executive call to resume payout ratios so long as they were capped at 50 per cent for the remainder of the calendar year.

Now, with retirees facing months of confirmed reduced dividends, the report shows that 38 per cent named dividend sustainability as one of their biggest priorities when deciding on new investments in a post-pandemic world. In saying that, 31 per cent also decided they wouldn’t be making any new investments within the next 12 months.

However, if they were to invest in the coming year, the report said that 29 per cent would choose Australian shares while 26 per cent would go the conservative route and stick with term deposits despite Finder’s current comparison data showing disappointing return rates as low as 0.05 per cent for a six month term.

Unsurprisingly, retirees named the increasingly low interest rate environment as one of their two biggest challenges for making investment decisions alongside the market volatility and risk that comes with being involved in the sharemarket during this time.

With the report finding that over the next year the expected overall investment return will drop from a median 8.4 per cent to 5 per cent, it’s also no wonder more older Australians are opting out of the sharemarket all together. Retirees were actually the most likely demographic to cash-up in this financial climate with 15 per cent adjusting their investment portfolios to increase their overall cash allocation.

Meanwhile, 12 per cent decided to increase their investments in Australian direct shares while majority of all retirees (63 per cent) made no changes to their portfolios and instead decided to sit tight and wait out the pandemic.

Those who received financial advice during the rocky beginning of the pandemic, which included almost a quarter of all retirees, followed similar paths with a quarter of this group investing all of their spare cash over the past three months, while a quarter increased their allocation to Australian direct shares and many made no changes at all.

The report also delved into the levels of trust Australians have in financial organisations. The Australian Securities and Investments Commission (Asic) took out the top spot with a score of 6.1 out of 10, while banks came in last place with a trust score of 4.9 out of 10. Financial planners and super funds didn’t fare much better with 5 and 5.8 out of 10 respectively.

Have you or someone you know delayed their retirement due to Covid-19?