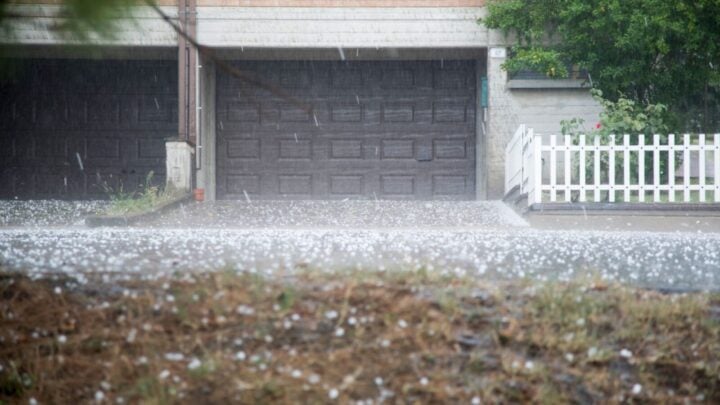 The Insurance Council of Australia has warned against scammers who happen to turn up right after a disaster offering their services and asking for cash. Source: Getty.

In September, the Bureau of Meteorology (BOM) declared a La Niña was officially underway in Australia. This is a phase of the El Niño Southern Oscillation (ENSO), which results in above-average rainfall and increased chances of flooding and cyclones particularly across the north and east coast of the country.

Now, BOM has predicted this will continue until the end of Summer, dragging on through to the new year. So with wet weather guaranteed to rage across Australia’s coast in the coming months, houses, cars and other expensive assets are at high risk of damage.

And the proof of this has already been seen through the massive hail storms, severe rainfall and flash flooding that recently lashed out against the east coast just last week which served as an aggressive reminder for Aussies to double check their insurance policies. Although generally speaking, storm damage is covered by most insurance policies, there are definitely grey areas due to there being no stock-standard definition as to what constitutes a storm.

A common mistake however, particularly for those who are due to be most affected by La Niña, is underinsuring a house to avoid paying higher policy costs. But rather than turn a blind eye to the situation, those in high-risk areas should instead be acting quickly by getting advice from local councils and reinforcing houses to ensure they’re protected against inevitable storms and possible damage.

Generally the aftermath of natural disasters brings out the good in the community, but unfortunately, it can also bring out groups looking to take advantage of those in vulnerable positions. And the presence of the latter group is what drove the Insurance Council of Australia to issue a timely warning for people in high-risk areas to stay vigilant.

Scammers, commonly known as ‘disaster chasers’, can usually be found door knocking on the streets of damaged areas to offer up their services. Although they’re often present directly after a disaster, some can even appear months later.

Many disaster chasers will offer urgent inspections or repairs for cash only to leave the work either poorly done or unfinished. They also are unlikely to hold any businesses licensing, trade qualifications, professional indemnity insurance or even just an ABN.

Often, this group of scammers will pose or operate as a small business, such as roofers, when they first arrive. Then, after the damaging state of weather has passed, they’ll pressure householders to sign a contract on the spot, often promising that an insurance company will cover the costs.

However, insurers rarely pay for unnecessary or cosmetic repairs and will generally only cover approved work that is within the policy. This often leaves victims with an inflated bill and no easy way of paying their way out of it.

Luckily, it’s pretty simple to spot a disaster chaser through the way they present themselves. Firstly, an insurance company would never send a tradesperson or builder to a home without pre-warning the owner nor would they make the home owner pay, so if someone turns up unannounced or asks for money, it’s likely to be a dodgy deal.

Additionally, there’s no need to sign a contract on the spot. For those who are unsure and want to protect against scam repairs, simply contact the insurer to confirm they’re covering the costs and ask for identification from the builder in the form of building licence or even a driver’s licence.

However, if a contract happens to be signed, Legal Aid Queensland says there is a statutory 10-day cooling off period for unsolicited consumer agreements to the tune of more than $100 which includes disaster-chasing door knockers. This means people should contact their insurers as soon as possible to help end the scam relationship.

Do you know if you're insured for storm damage? Have you encountered a disaster chaser before?