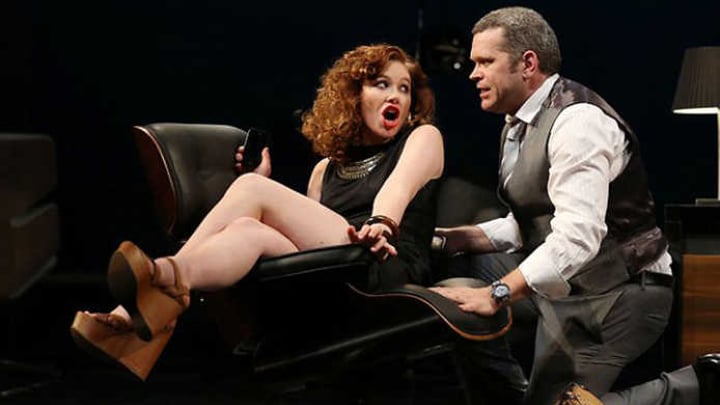 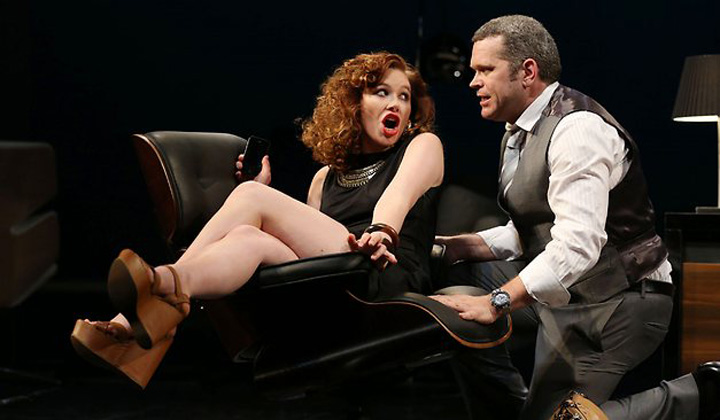 In a sell-out of seats you could have Hird, sorry heard, a pin drop as the opening lines were delivered.

In a week of revelation of scandal surrounding Essendon Football Club, it was a pleasure to watch David Williamson’s scintillating take on yet another side to AFL codes.

Meet Brent Lyall (Jamieson Caldwell), on the surface one of the rising stars of a Victorian super team with dual Brownlow Medals, and only 23 years of age, and a glamourous trophy girlfriend to boot: Clara Salope (Annie Last) (no pun intended).

But delve into the dark machinations of David Williamson’s satire of the men who manage these super stars – Rohan Swift (Brandon Burke) and the journalists – Max Upfield (Trent Baker) who are hungry for any bit of trivia regarding their off field persona, and you have the perfect recipe for an hilarious evening of an evolving exposé of what can happen when a football star undergoes a psychological rebirth of his personality through Jessica Giordano (Hannah Norris) so he can sell more product.

From one of the simplest sets imaginable – two chairs – the five characters bring this diamond sparkling dialogue alive with their oh-so-true interpretations of the people behind the facades they portray.

The wit of Williamson shines brightly as a beacon and illuminates and fairly crackles all the way through the play as line after line is delivered with humour and pathos in equal measure.

You don’t just get one of the funniest plays you will see this year in any theatre in Australia, but you get to deep dig into the social conscience of Australians as a whole and a reflection of where our morals and prejudices lie.

The five stars deliver a fait accompli in making this a rib tickling revelation of one man’s weaknesses and his options for dealing with a past fast catching up with him, soon to overtake him.

From beginning to end this play was an absolute delight to watch, and surely one of the greatest testaments to living legend David Williamson who I was lucky enough to be sitting in front of at the theatre. When I asked David what his thoughts were on seeing his own play performed in his home town in front of him, he said he wished that the audience had not laughed so much at the funniest lines as he found it hard to hear the words. Christine Harris (Producer) and Denis Moore are to be congratulated for delivering such powerful theatre in a minimalist setting.