‘There was no sound, it was so quick’: Grandma rescues grandson from lake 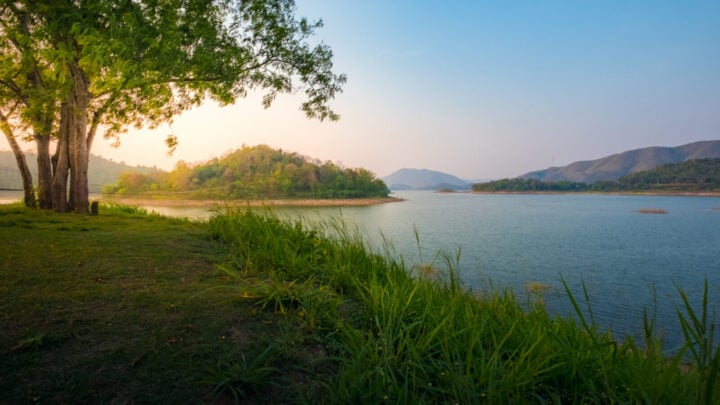 Lucy is warning grandparents to stay vigilant around water when looking after grandkids. Source: Getty

When Lucy took three of her grandchildren to the park for a bike ride, she never thought she’d soon find herself living out her worst nightmare. But when her little grandson Ned lost his balance on his bike and fell into the dark and murky lake, her maternal instincts kicked in.

“The kids were getting on their bikes to go home and [my granddaughter] Grace turned to me and pointed out a koala in the tree,” she said. “I turned my eyes away from the kids to look up into the tree for a few seconds when Ned turned his balance bike around and wheeled it towards the grassy edge of the lake, instead of the bitumen footpath we usually rode on. When I looked back down, my worst nightmare had become a reality. Ned had lost his balance on the bumpy grass and had fallen into the water.”

The water was dark and Ned was screaming for help.

“All I could see was his head underneath his helmet and his little hands were paddling really fast, trying to stay above water,” Lucy said. “The water was so dark I had no idea if the bike was in there too or if he’d been underwater already. I had no idea how deep it was.”

Thankfully, Ned managed to stay close enough to the edge for Lucy to reach in and pull him out while she remained on the grass. She said he was holding the bike so tightly that it was still wedged between his legs when she pulled him out of the water.

While Ned recovered from his shock, the incident hit Lucy like a tonne of bricks. Now she wants to remind all grandparents to remain vigilant when looking after their grandkids.

“It only took a few seconds of me turning my back and there was no splash or sound of him falling in … it was just so quick,” she said.

Like many Aussie kids, Ned had been taking swimming lessons since he was two and Lucy believes these irreplaceable skills ultimately saved his life.

“He knew how to keep his head above water even with his heavy helmet and clothes on. If his head had gone under, I wouldn’t have been able to see him or know where he was. That’s the scary thing. It’s so important to make sure your grandkids have those basic skills and are getting the guidance they need from a professional swim teacher regularly.”

The most recent figures from Royal Lifesaving Australia show that 12 children aged zero to four drowned in Australia between July 1, 2019 and June 30, 2020. This number is a 37 per cent decrease on the year before and a 52 per cent decrease on the 10-year average, but it’s a frightening number nonetheless. The majority of child drownings happened in a swimming pool, followed by lakes, and then baths.

Mark Collins, CEO of JUMP! Swim Schools said there are several key factors every grandparent should do to ensure their grandkids remain safe around water.

“Discuss with parents the current swim level of the child – if the child’s swimming skills may be a little rusty, then make decisions accordingly for example, perhaps this summer, instead of going to the pool, just play under the sprinkler instead.”

He also suggested grandparents only go to water locations where they’re comfortable reacting to an accident occurring. So if they don’t feel comfortable jumping into a river than it’s best to choose a shallow option, like the kids’ section at a leisure centre, that is manned by a lifeguard.

Grandparents should always be on high alert when kids are around water, even for something as simple as bath time, and if possible they should always be in the water with kids when they’re playing or swimming. Collins also recommends telling children about the dangers of water, including the specifics of the location their heading to, before setting off.

As for Lucy, she’s thankful her story had a happy ending and plans on keeping a closer eye than ever on her grandkids when they’re playing near water.

Have you ever experienced something like this? What do you do to stay safe with your grandkids?