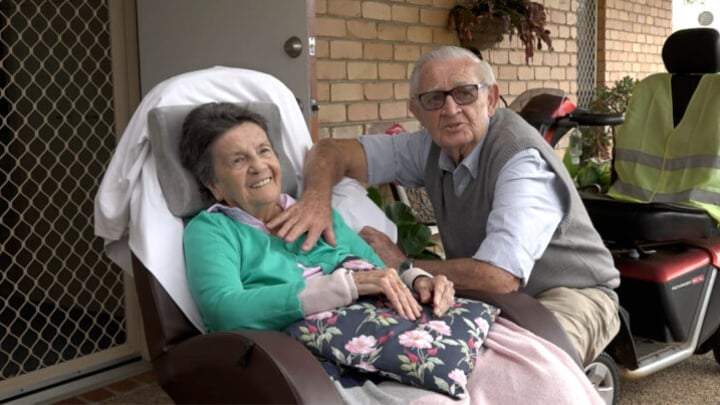 Noel and Gloria Jamieson have been married for 66 years, but they've faced some challenges along the way. Source: Anglicare Southern Queensland

After 66 years of married bliss, Queensland couple Noel and Gloria Jamieson are perhaps the perfect example of true love. They survived a long-distance start to their relationship, raised children together, faced losses, battled through health issues and somehow have come out the other side stronger than ever. Even a pandemic, dementia and a move into residential aged care hasn’t kept them apart.

Gloria now lives in an aged care home in Bundaberg, while Noel, 88, lives in the family home a short drive away. Typically, Noel rides his motorised scooter four minutes from his home to visit the love of his life at Anglicare Southern Queensland’s Meilene Residential Aged Care Home every single day, packing her favourite food in an esky and arriving just before lunch to feed her.

However in recent months, just like many others, the couple has had to adapt to a new way of life in the wake of the ongoing Covid-19 pandemic, with aged care visitation limited and strict policies in place to ensure the health and safety of the most vulnerable.

“Before these restrictions I used to spend three to four hours a day here,” Noel said. “Now I don’t come up until right on lunch time so I can feed her, and then after lunch I can stay and get her to sleep.”

But, for this couple, a virus is nothing compared to the other battles they’ve faced together. As a young couple they welcomed six children into the family in as many years, including twin boys. Tragically though, they lost one of their sons in his early 20s, after he was involved in a car accident. Noel has also battled prostate cancer, suffered multiple strokes and heart attacks and received three hip replacements. While Gloria, 84, has lived with dementia for more than 10 years, leaving Noel with the difficult decision to ultimately place her in full-time care.

Their enduring love story began when Gloria travelled from Brisbane to the small town of Cunnamulla, which lies around 750 kilometres west of the capital city, for a holiday. Noel was working for her uncle at the time and made it his mission to ask her out. And from the moment he laid eyes on his future wife, he was blown away, while Noel reckons he “stole her with his good looks and charm”.

“Gloria was a different girl to all the other girls and that is what drew me to Gloria,” he said. “She was a special girl and still is. I introduced myself and asked her to go out to the movies with me, to which she accepted and the rest as they say his history.”

Their relationship began as mostly long distance, but, despite this their love blossomed. Noel added: “I would write letters and we’d phone each other. We would only see each other twice a year. I even got to know the ladies on the phone exchange well and they knew when and who I would be ringing.”

After their wedding in Brisbane, Gloria left the city and they moved to the bush where Noel returned to work at the railway. It was there that they welcomed their children and battled through many hardships together, including the death of their son. But, through it all their relationship remained strong and their love continued to grow.

“She stuck with me all the way through it and I know it was tough,” Noel said. “Our beautiful kids are a credit to her.” Asked if his love is still as strong as it was after all those years together Noel added: “It’s more every day. I tell her that every day. I say to her I don’t know how it happens, but it happens. I love her very much.”

Sadly, the couple no longer live under the same roof, and like many who suffer from dementia, Gloria had to move into aged care. It wasn’t a decision taken lightly, in fact, it wasn’t really a decision at all – Gloria had to make the move due to her health, as heartbreaking as that was for Noel.

“It got to the stage where I couldn’t really go out to the shops or anything and just pop her somewhere while I ducked into the shops quickly, because when I came out she’d be gone, especially if there was a jewellery store around … Gloria loves her jewellery,” Noel said.

“She was at home with me for five or six years beforehand, but she had a UTI (urinary tract infection) and went into hospital and she wasn’t going to come home from hospital. It was also due to my health. It was very hard not having her with me, but I appreciated it very much knowing she was going to be looked after by the staff at Meilene.”

Noel and Gloria certainly aren’t alone in their physical separation. Sadly, many couples have to make the difficult decision for one person to go into aged care – particularly when it comes to dementia – and while important for their health, it can have a detrimental effect on the relationship. The person who stays at home can start to feel guilty or as if they have failed their partner. They might question whether they should have tried harder to care for their loved one and ultimately, their own emotional and physical state might suffer.

“Often the person entering care can initially lose some skills and seem to deteriorate; this can stabilise but can be confronting,” Elisabeth Shaw, chief executive officer at Relationships Australia NSW said. “It may also set up a taxing routine of the person at home visiting, and feeling they have to every day. Depending on the location and mobility of the person at home, this can be exhausting and difficult, even in the best of circumstances.

“They might devote themselves to being there all day, and have little time for themselves, friends or other interests, which they might have had when both at home. They might feel guilty saying, ‘I’m going out’, when the person in care cannot.”

Generally though aged care facilities are fairly accomodating, and understand the importance of connection for couples. In Australia, there are often private spaces created and practices to support that alone time. This could be as small as sharing meals with loved ones, doing a puzzle together or helping to perform roles to assist their new lifestyle, health and wellbeing. It all depends on the facility and flexibility, and the capacity of the person in care and the previous history of their relationship.

Aged care facilities across the country have also taken dramatic steps to keep couples together when they both enter the facility – something which years ago wouldn’t have even been considered. According to Marcus Riley, Director of Global Ageing Network, the design, layout and service models have evolved in huge ways over the years and accomodation for couples is very much an option.

The situation must be adapted to suit each couple, with one partner perhaps having higher needs than the other. But ultimately, Riley said it’s important to remember that just because they are older, doesn’t mean their desire for sexual pleasure has faded.

“Certainly, the care needs of each individual must be considered,” he said.  “For example, one spouse may not want to be in the same accommodation unit or same bedroom. But, increasingly care models are more focused on the individual and consequently more conductive to couples being cared for together, irrespective of differing care needs.

“Having a romantic relationship is hugely important, as it is at any other age. Yes there will be realities that need to be acknowledged, there will be a need to adapt, communicate and still have fun. There should never be any sense of having to cease intimacy because of a certain age.”

For Noel and Gloria that love has certainly not died, and despite the Covid-19 outbreak, dementia and aged care, they have proved relationships can withstand challenges. Although they don’t spend as much time together as they once did, they are happy, and this past week they even celebrated their 66th wedding anniversary.

Although uncomfortable or upsetting to begin with, having one person move into aged care doesn’t mean the end of a relationship. While the progress of Gloria’s dementia means her speech is sometimes limited, she still loves music, and remembers every word to a variety of songs.

Gloria has always had a beautiful voice and used to go around to all the retirement homes in Bundaberg and sing songs to residents as part of a choir group. Now, staff members at the facility play songs by her favourite musician Vera Lynn every morning, so she can sing along to them while she waits for Noel to arrive – much to the amusement of their children, who admit they took after their dad in the singing department.

There’s no denying there’s still a lot of love between Noel and Gloria, and after many years the feelings have only grown deeper. Noel’s daily visits prove just how committed to the relationship he is, and that nothing can get in the way of their love, pandemic and all!

According to Noel, they were “just made for each other” and with true love, honesty and communication, they’ve made it through all of life’s challenges together. “It’s just you and me love, and a mob of kids,” Noel said to Gloria, with a huge smile spread across his face.

Do you have a loved one in aged care?