‘I wouldn’t be here today’: How Denise escaped the hands of her murderer husband 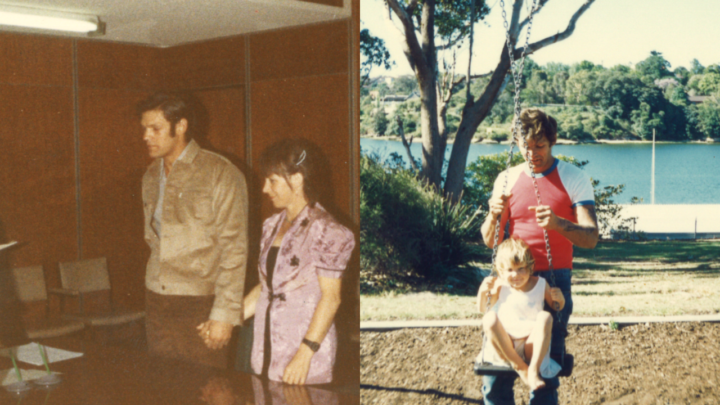 Denise Young met prisoner Allan Ladd while she was working as a volunteer at Freemantle Prison in the 80s. Source: Supplied

Denise Young, 72, knows all too well what it’s like to suffer at the hands of an abusive partner and believes she wouldn’t be alive today if she didn’t escape her marriage more than 30 years ago.

Her story starts all the way back in 1980 when Denise was just 33 years old and working as volunteer tutor at Fremantle Prison in Western Australia. Denise, who now resides in Sydney, had been living in Perth with her then-partner Pete (they’re now happily married) for two years before she took the ill-fated job.

This is where she met inmate Allan Ladd — the man who she would fall head over heels in love with, later marry and share a child with, and then flee from in the dead of night to save her life.

Now, Denise, has written a joint memoir, My Father the Murderer: A Reckoning with the Past, with her daughter Nina Young, the product of her relationship with Allan, which hit bookstands this week, detailing how she came to marry a murderer.

“It was naivety above all,” she tells Starts at 60. “I wasn’t that young, but I was certainly naive.”

Denise continued: “I was fascinated I suppose, I kind of didn’t know what I was getting myself into. When I went in I couldn’t believe how the men didn’t look like prisoners out of some British or American crime series show. Instead, they all looked very tidy.

“I do know that many of the women who went in, either as volunteers or as psychologists, ended up in relationships with the prisoners. I think there’s a very intense atmosphere in there, plus the prisoners are very manipulative.”

Denise learned early on that Allan was in for murder, but the details were never clear. Whenever she asked, he would play down the incident and claim it was just a stupid “pub fight” and that he should’ve received the lesser sentence for manslaughter. Denise, the faithful partner she was, believed him.

She would later learn that Allan strangled an Aboriginal woman to death in dense bushland some metres away from a drive-in in the town of Norseman, Western Australia. The horrific incident occurred in 1977, when Allan was just 19 years old.

“He was a model prisoner for the whole four years that I knew him [in prison],” she said, adding that his good behaviour led to his early release in 1984.

Denise went on to say that cracks started to appear through his ‘changed man’ facade after his release. During the two years that they lived together in Freemantle, she said Allan couldn’t hold down a job and drank constantly. He was also careless with their daughter Nina and her son Lex from a previous relationship. In the book she described how on one occasion, when Nina was just a baby, he dropped her from great height to stop her crying.

Denise writes in the book: “I can’t believe now that I thought such a romance could work beyond prison walls, but I really did believe in rehabilitation, and viewed prisoners as victims of our capitalist society. I was an actress who sometimes had a poor grasp on the real world and thought she was in a movie where people from the opposite backgrounds could fall in love and live happily ever after — or at least have fun trying.”

Asked if she thought she would’ve been his next victim had she not left, Denise tells Starts at 60, “I do, I totally do, and I don’t think that’s dramatic or over the top. He attempted to strangle me when I said I was leaving. That moment just clarified to me how in danger I was.

“And I think if I hadn’t had good friends who got me [and the children] on a midnight flight out of Perth, I don’t think I’d be here otherwise.”

After her swift escape, Denise focussed on rebuilding her life back in Sydney. She rekindled her romance with Pete, who had moved back to Sydney after she got together with Allan, with the pair marrying in 1987. They also welcomed a daughter named Mel that same year.

Since then, Denise has only seen Allan a handful of times. A few times when Nina was little, and twice in prison after Allan’s son, Conan, from another relationship came to stay with them for several months. Allan was serving out a manslaughter sentence for striking a man on the head with a whiskey bottle. She also wrote to him in 2019 to let him know that their daughter was working on a podcast about the shock of finding out what happened in Norseman in 1977.

When Denise moved back home, she made a conscious decision not to tell Nina about her dad. As the years went by, it got harder and harder to hide the truth. Before Denise had a chance to come clean, Nina discovered the shocking truth about her father.

“I was devastated,” she says. “I was devastated for her. I just thought this will absolutely crush her and I felt so guilty. But she managed to get through it. I’m not quite sure how she did it, but shortly after that she decided to be a journalist ”

Denise revealed she was hesitant at first after she heard Nina’s plans for a podcast, mostly because she didn’t want Nina to be seen in the same light as her father and because she still felt shame herself and was worried what people may think. Denise, however, quickly overcame those fears and agreed to talk openly about her past. She thought if anyone told her story, it better be her. She also believed her story would help others in similar situations.

“There is shame still,” she says. “Of course I feel shame about what happened and what I did. Looking back now, I think how could I have done that, but at the time, everything sort of faded into this dream of a great relationship that was born out of this misery.”

Asked how she feels about Allan today, Denise says she doesn’t hate him. “I don’t feel hate, no. We had a life forming that was looking really good and he blew it, well I blew it by hooking up with him. But you know there’s been other chapters since, and the many years since then have been really good, so I have no reason to hate him.”

However, when she thinks back to their first encounter all those years ago in Freemantle Prison, Denise says she wishes it never happened. “When I first saw Allan, I immediately felt an attachment to him,” she recalls. “I think now I wish I turned straight around and left the room.”

Asked what advice she’d give to other women in abusive relationships, Denise said, “Don’t [go back]. People who show that degree of violence towards you, show so little respect, are not going to change. I think change is very hard in anybody who is that determined to exert their power on another person”.

Have you suffered from domestic abuse before?