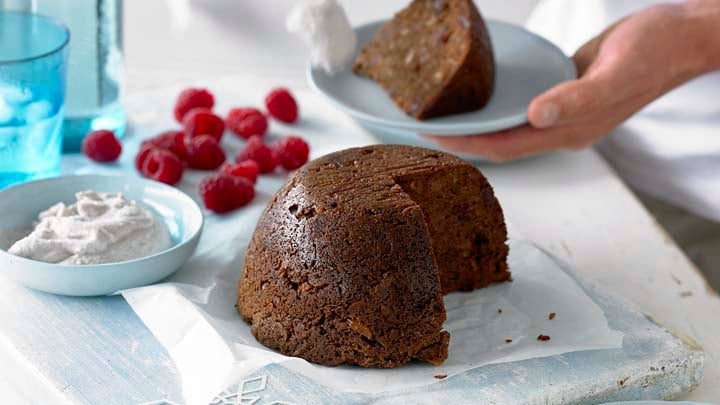 It’s not Christmas time without a delicious pudding – but there’s no need for all that refined sugar and flour. Our pud is all goodness. You’ll need to plan ahead just a little to make the spiced cream – the cans of coconut cream go in the fridge overnight.

For the spiced cream

1. Chill the cans of coconut cream (see Spiced Cream ingredients) in the fridge overnight, so they’ll be ready to go when you are.

2. To make the pudding, grease a 6-cup capacity ceramic pudding basin and line it with baking paper. Fill a large saucepan with water, put an upturned plate in it, and then put it over medium heat. (The plate protects the pudding basin from the heat at the base of the pan). Cover the pan and bring the water to a simmer.

3. Put the dates, orange zest and juice in a small saucepan over medium heat and bring to a simmer. Simmer, stirring occasionally, for 3 minutes, or until the dates are slightly softened. Take the pan off the heat, then mash the date mixture and transfer it to a heat-proof bowl.

4. Add the remaining ingredients and stir until well combined. Spoon the mixture into the pudding basin and level the top. Cover the surface directly with a round piece of baking paper, then cover the basin with a sheet of baking paper and then a double sheet of foil. Secure the paper and foil around the lip of the pudding basin with cooking twine to form an airtight seal.

5. Gently lower the pudding into the simmering pan of water and turn the heat down to low. Simmer very gently, topping up with boiling water as needed, for 4 hours, or until the pudding is cooked. You don’t want it boiling dry, so make sure the water comes three-quarters of the way up the side of the pudding basin. When it’s done, carefully lift the pudding out of the pan and let it stand, covered, for 20 minutes. While it stands, put a mixing bowl in the freezer to chill.

6. To make the spiced cream, take the chilled bowl from the freezer. Open the chilled cans of coconut cream, then spoon the thick layer of cream off the top and into the chilled bowl. You will need 1.5 cups of this firm cream. (You can use the leftover coconut milk in your breakfast smoothies.) Add the maple syrup and mixed spice and whisk using an electric mixer until soft peaks form. Keep the cream chilled until ready to serve.

7. Take the paper and foil off the pudding and turn the pudding upright onto a serving plate. Top with raspberries, then serve warm with the spiced cream.