Daily Joke: A teacher was trying to help her students 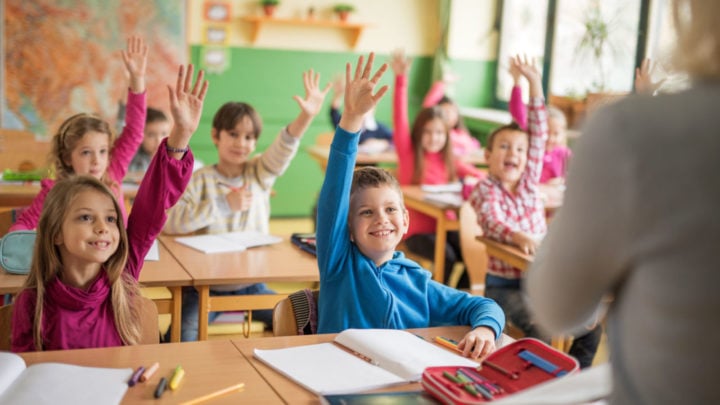 The first-grade teacher was showing pictures of animals to her students. Source: Getty.

The first-grade teacher was showing pictures of animals to her students to see how many they could name. She held up a picture of a lamb, and a little girl said: “That’s a sheep!”

“That’s right!” said the teacher. “How about this one?” she said, holding up a picture of the king of beasts.

“Right!” said the teacher. Then she held up a picture of a deer. No one volunteered an answer. She tried to help. “What does your mother call your father?”

Daily Joke: A magician was working on a cruise ship in the Caribbean

A magician was working on a cruise ship in the Caribbean. The audience would be different each week, so the magician allowed himself to do the same tricks over and over again.

There was only one problem; the captain’s parrot saw the shows every week and began to understand what the magician did in every trick. Once he understood that, he started shouting in the middle of the show.

“Look, he’s hiding the flowers under the table!”

“Hey, why are all the cards the Ace of Spades?”

The magician was furious but couldn’t do anything, it was the captain’s parrot after all.

One day the ship had an accident and sank. The magician found himself on a piece of wood, in the middle of the ocean, and of course the parrot was by his side. They stared at each other with hate, but did not utter a word. This went on for several days.

After a week the parrot finally said: “Okay, I give up. What’d you do with the boat?”

Daily Joke: A man and his wife were having an argument

A man and his wife were having an argument about who should brew the coffee each morning.

The wife said: “You should do it because you get up first, and then we don’t have to wait as long to get our coffee.”

The husband said: “You are in charge of the cooking around here so you should do it because that is your job, and I can just wait for my coffee.”

The wife replied: “No, you should do it, and besides it says in the Bible that the man should do the coffee.”

The husband answers: “I can’t believe that! Show me.”

So she fetched the Bible, opened the New Testament and showed him at the top of several pages, that it indeed said: “HEBREWS.”