Daily Joke: Some days it doesn’t pay to get out of bed 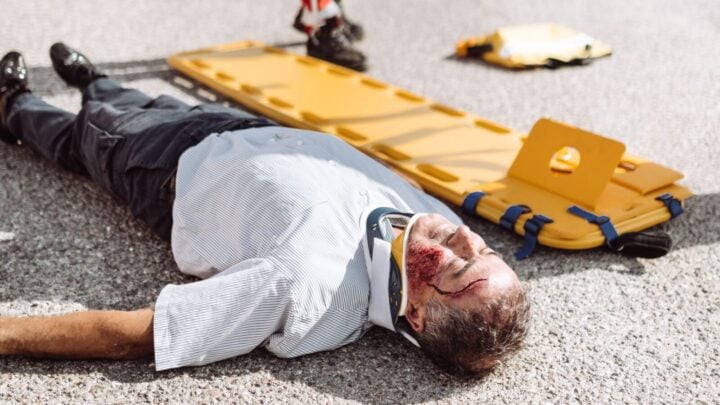 The poor guy was having a shocker of a day. Source: Getty Images

A man was working on his motorcycle on his patio and his wife was in the kitchen. The man was racing the engine on the motorcycle when, somehow, the bike slipped into gear. The man, still holding the handlebars, was dragged through the glass patio door and dumped onto the floor inside the house.

The wife, hearing the crash, ran into the dining room and found her husband lying on the floor, cut and bleeding, the motorcycle lying next to him and the patio door shattered. The wife ran to the phone and called for an ambulance.

Because they lived on a fairly large hill, the wife went down the several flights of long steps to the street to direct the paramedics to her husband. After the ambulance arrived and transported the husband to hospital, the wife managed to push the motorcycle outside. Seeing that petrol had spilled on the floor, the wife grabbed some toilet paper, blotted up the fuel and threw the paper in the toilet.

The husband was treated at the hospital and was released. When he arrived home, he looked at the shattered patio door and the damage done to his motorcycle. He became despondent, went and sat on the toilet, smoking a cigarette while he was there. When he finished the cigarette, he flipped it between his legs into the bowl while still seated.

The wife, who was in the kitchen again, heard a loud explosion and then her husband screaming. She ran into the bathroom and found her husband lying on the floor. His trousers had been blown away and he had burns to his buttocks, the back of his legs and his groin. She ran to call the ambulance. The same crew that attended the house the first time were dispatched, and the wife met them at the street.

The paramedics loaded the husband onto the stretcher and began carrying him to the street. While they were going down the steps, one of them asked the wife what had happened this time. She told them how her husband burned himself and the paramedics started laughing so hard one of them tipped the stretcher and the husband fell out. He rolled down the remaining steps and broke his arm along the way.

Some days it just doesn’t pay to get out of bed!